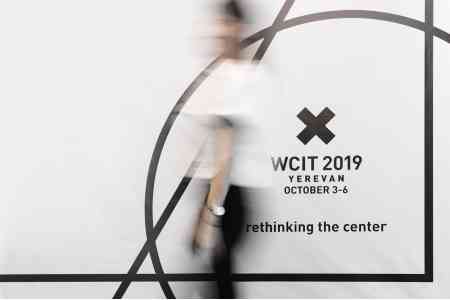 ArmInfo. Armenia officially  starts organizational work on the holding of the Global Congress-2019  (WCIT-2019) in Yerevan, which will be held from 3 to 6 October.  This  was announced by the chairman of UITE Alexander Yesayan on February  24 during a press conference. He noted that Armenia will have to  implement a huge amount of work.

In turn, UITE Executive Director Karen Vardanyan noted that today  Armenia already has a program of envisaged work on the organization  of the congress, prepared sponsorship packages, developed a web page  design, conducted branding, at the stage of finalizing work on  developing branding for B2B meetings.

According to Vardanyan's estimate, WCIT-2019 will gather about 2  thousand delegates from different countries of the world, of which  half will be Armenia and Diaspora, about 500 - from developed  countries, and the remaining part - Representatives of the markets  that are of interest to Armenia, in particular the African, Arab  markets and the Latin American market.

In addition, he noted that a government commission had been set up a  few months ago, but so far no full meetings had been held. "We hope  that after the next Congress in India from 19 to 21 February, the  meeting of the commission will be held soon, and we will hold  relevant discussions, and as a result, we will ensure the progress of  the preparations," he stressed.

The budget of the envisaged works has not been specified yet, but  according to preliminary estimates it will amount to several million  US dollars, Vardanyan said. "Everything depends on the number of  participants, and the program of our events for the reception of  guests," he explained. In this regard, Vardanyan said that $ 750  thousand will be allocated from the state budget as a mandatory  contribution, stipulated by the organizers for the right to host the  Congress. In particular, he noted that until May of this year Armenia  should present the project itself to the World Alliance of IT  Associations (WITSA). "Even after discussions with WITSA, it will be  possible to talk more specifically about the envisaged events," he  stressed.

Answering the question of ArmInfo, A. Yesayan noted that thanks to  the holding of the Congress, Armenia will have an opportunity to  present domestic potential on the international scene to world  leaders and giants of the IT sphere. Speaking about the  competitiveness of Armenian IT products, he noted: "If we compare  with India, we can not compete with them in the quantitative and  price segment, but from the qualitative point of view, the Armenian  IT product takes a high position. In particular, the mathematical  direction of IT in Armenia is quite competitive. If we manage to  adequately position ourselves at the Congress, we will be able to  attract large additional investments into the sphere."

Note that the Congress is organized since 1978 by the World Alliance  of IT Associations (WITSA) and has been held every two years in  different countries, and since 2017 - annually. WCIT is the world's  largest IT event and gathers top managers from leading companies,  university leaders and research centers, as well as the world's  highest representatives of the world - more than 2,000 delegates and  50 exhibitors. This year the Congress was held in Hyderabad (India).

According to the National Statistical Service of Armenia, the IT  sector of Armenia as of the end of 2017 reached a 13.6% growth,  providing an annual revenue of 269.1 billion drams ($ 557.5 million).  According to the National Statistical Service of the Republic of  Armenia, 80.1% of the total volume of the IT sector's revenue falls  on the services provided, with an annual growth of 6.5% to 215.5  billion drams. Considering the anticipated GDP in 2017, the share of  the IT sector will be about 5% of GDP.