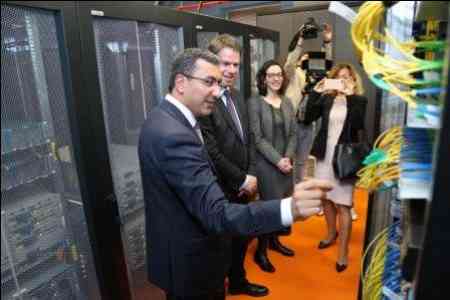 ArmInfo. Since February of this year French TV channel TV5 has become available to subscribers of tariff plans of Rostelecom Armenia. This became known during the visit of Ambassador Extraordinary and Plenipotentiary of France to Armenia Jonathan Lakota to the head office of the company.

According to the press service of the company, during the meeting of the French Ambassador with the Director General of Rostelecom Armenia Hayk Pharmazyan, the issues concerning the importance of the dissemination of the French language and French-language information sources in Armenia were touched upon. In particular, the parties attached special importance to the broadcasting of French-language television channels and ensuring the accessibility of French films to the public.

"After Rostelecom included TV-5 in its main package of proposals for entrepreneurs and hotels, I had a desire to visit the office of the company. This corresponds to the Linguistic Pact signed by Armenia in 2012, providing for the universal broadcasting of TV-5, which broadcasts programs and news from around the world of Francophonia and is the cameraman of the International Organization of Francophonie and its member states. Thus, the TV-5 is also an Armenian television channel that will broadly cover the summit of the Francophonie, which will be held this year in Yerevan, "the French Ambassador to Armenia said.  In his turn, Pharmazyan noted that broadcasting of foreign TV channels contributes to raising public awareness and education. <Considering the great demand, from 2013 to the present day we have included in the list of our channels France 24, and from the half of 2017 and French TV5Monde. In addition, through SMART-TV, our subscribers, in addition to Armenian TV channels, have the opportunity to watch French, Russian, English, German, Polish, Arabic, Italian TV channels. The company realizes this initiative, guided by the needs of our subscribers. In particular, we intend to continue to gradually expand and replenish this list, "he said.  JSC Rostelecom (www.rostelecom.ru) is one of the largest national telecommunications companies in Russia and Europe, present in all segments of the communications services market. The number of Internet users exceeds 10.9 million, and pay-TV subscribers - 7.7 million. Russian OJSC Rostelecom through its subsidiary in Armenia, GNC-ALFA started promotion and retail sales of telecommunications services in Armenia under its own brand at the end of 2012. The financial stability of the company is confirmed by the assignment of a high rating: "BBB-" - from Fitch Ratings and "BB +" - from Standard & Poor's.