Karen Brutyan: The approach of tax authority is very clear: everyone must pay taxes 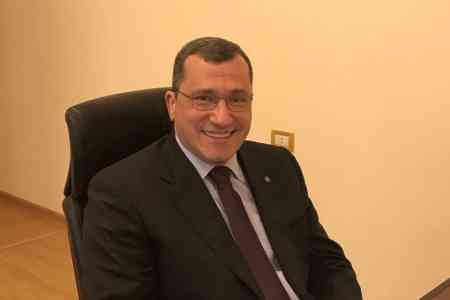 ArmInfo. As a result of 2017, the State Revenue Committee of Armenia provided 1 201.6 trillion AMD of tax revenue (including VAT) instead of the planned 1,135 trillion AMD. The amount of tax revenues for the reporting period exceeded the actual annual indicator of 2016 by 124.7 billion drams or 11.6% (1,076.9 billion AMD). Karen Brutyan, the first deputy chairman of the SRC, stated this at a meeting with journalists on March 2.

According to him, it is important that such an increase in tax deductions in the past year was accompanied by a significant reduction in tax overpayments. In particular, in 2017 the volume of real overpayment decreased by 13.1 billion AMD or 9% compared to the previous year. "Progressive growth of tax revenues of the budget in 2017 was mainly ensured by reducing the tax shadow," Karen Brutyan said.

The positive tendency was also registered this year: according to the results of January-February 2018, the tax and customs revenues of the state budget totaled 183.9 billion drams, as compared to the same period of 2017, fixing growth by 19.3 billion drams or 11, 7%. At the same time, payers of the trade fee increased tax payments to the budget by 12.2% in the reporting period: by 10.4% for large and medium taxpayers, by 19.5% for small-scale taxpayers.

At the same time, as the deputy chairman of the tax and customs committee said, the agency is not going to stop there. In 2018, SRC will continue the policy of improving tax administration, with parallel expansion of analytical and control work to prevent and identify tax shadows.

In this context, to increase the effectiveness of control measures and to level out the risks of the tax shadow, payers of the trade fee with an annual turnover of 115-500 million AMD, taxpayers included in the annual plan for scheduled inspections, as well as non-trade organizations are affiliated to the Tax Inspectorate for Small Taxpayers . Thus, as Karen Brutyan noted, centralized tax administration provides a uniform administration scheme and improves the efficiency of shadow detection work.

At the same time, in the process of adjusting the relations with the budget, it is planned to implement a pilot program whose purpose is to transfer some of the desk checks from the taxpayer's territory to the tax authority's office, to reduce direct communication between taxation and taxpayers, while ensuring the completeness of inspections and the responsibility of the tax official for the quality of work. "As a result of the program, we expect to improve the quality of the verification processes to a new level," Brutyan said.

In the context of ensuring the tax revenues of the state treasury, explanatory work with over 500 taxpayers in 18 spheres recognized as risky continues. At the same time, for today the tax body provides services to participants of the process on the principle of a "single window". A taxpayer, regardless of the place of registration, can apply to any territorial unit.

In addition, among the initiatives of the department planned for 2018, the first deputy chairman of the SRC noted the pilot program for introducing horizontal monitoring. The system is planned to be implemented on a voluntary basis. At the same time, the tax authorities undertake to monitor and maintain the system on a free basis. As a result, information will be exchanged between the organization and the tax authority electronically in real time, with the exception of checks during monitoring. Thus, taxpayers provide full access to tax information for information on their activities. In this case, if inaccuracies are revealed, the tax authority is advised to inform the taxpayer about it, and the latter - to adjust it without applying measures of responsibility. "All those who declare their law-abidingness have no reason not to join the system," he said, adding that the SRC hopes to soon join the system of many taxpayers.

According to Brutyan, in fulfillment of the Prime Minister's instruction, a working group was set up, which in the shortest time promises to submit proposals to the government staff to level the risks of the tax shadow, eliminate the mechanisms that facilitate it, and to fill the current legislative gaps and mitigate the taxation administration in respect of law-abiding taxpayers.

Currently, according to the first deputy head of the Tax and Customs Committee, the basis of the department's work is the principle of applying a relaxed administration with respect to law-abiding taxpayers and the formation of their positive image in society. "The approach of the tax authority is very clear: everyone must pay taxes." Malicious evasion of tax payment will be stopped, "the deputy chairman of the Armenian State Hydrometeorological University said.