SRC Deputy Chairman: The risks of tax shadow in Armenia still have a total character 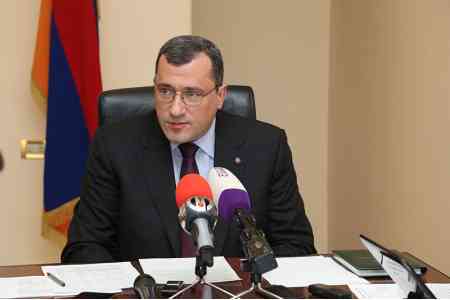 ArmInfo. Despite obvious progress on the collection of taxes, the risks of tax shadow in Armenia are still total. Answering the question of ArmInfo, the first deputy chairman of the State Revenue Committee of the Republic of Armenia Karen Brutyan stated on March 2 at a press conference.

As Brutyan pointed out, to this day there is no clear formula for calculating the tax shadow. Based on this, it is impossible to talk about how much the shadow in the Armenian economy has fallen over the past two years. The results of work to neutralize risks, the deputy chairman believes, can be called the following: the volume of tax revenues exceeds revenue growth (for objective reasons). "The difference, in the opinion of the SRC, was formed by reducing the shadow," he said.

At this stage, according to the estimates of the KGD, among the large (currently 1000 large payers of trade fees in the RA) and medium (3,500 business entities) taxpayers, about 50% of them are considered risky, and in the group of small (about 65 thousand) 75% or more. It is noteworthy that among large taxpayers the specific weight of the shadow is lower than that of small ones. True, in the fiscal sense, the impact on the collection of large taxpayers is more than high. According to the estimates of the KGD, in the segment of large taxpayers the generalized shadow is 15-20%, and among the small ones - from 50% to 100%. As explained by Brutyan, the recorded increase in tax revenues, mainly provided by increasing the profits and turnover of large taxpayers.

In general, as Karen Brutyan pointed out, today there are two schemes of tax evasion among taxpayers.  Basically, the tax shadow is formed due to concealment of part of the turnover, inadequate declaration of the number of employees or the amount of their wages, as well as due to submission to the tax authority of fictitious expenses that are not related to the economic activities of the economic entity. The "deviators" of the second group use gaps in legislation and tax incentives.

At present, all the so-called risky taxpayers are individually working, especially those whose annual turnover exceeds 115 million drams. Last year, a process called "Shadow Certification" was launched to identify risks. Further information on risks is transferred to the taxpayer with a request for clarification of the situation and its correction. Otherwise, control measures take effect.

A month earlier the head of the Union of Employers of Armenia Gagik Makaryan stated that at present the share of shadow economy in big business is about 30%, small and medium-sized business in this respect a little more "succeeded". Referring to the data of the International Monetary Fund (IMF) and the World Bank (WB), the expert noted that due to the scale of the "shadow" the Armenian budget annually loses on average up to $ 2 billion. At the same time, he urged with special caution to fight the "shadow". "Without creating the appropriate conditions for the development of the business environment, we can destroy the business by the results of this struggle. Thousands of entrepreneurs survive precisely because of the "shadow." Thus, the pace of improving the business climate in Armenia, as well as stimulating exports, should outpace the dynamics of the struggle with the shadow economy", he concluded.

According to various international structures, the shadow economy in Armenia has grown to 50% in recent years. According to the latest data from the State Revenue Committee, the "shadow" has significantly decreased, in particular, by the collection of taxes - up to 30%. Vardan Harutyunyan, Chairman of the Committee of State Revenues of Armenia, assured that on October 4, 2016, at a meeting with journalists, the agency is struggling with the shadow in the daily regime and the results of this struggle are obvious.