Armenia is reforming the sphere of corporate financial reporting 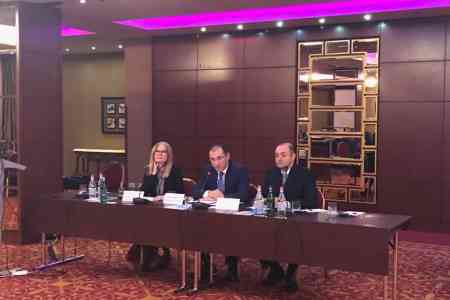 ArmInfo. Reforms in the field of  corporate financial reporting will lead to increased transparency and  confidence building among business entities. Such an opinion was  expressed by the director of the World Bank office in Armenia Sylvie  Bosutho on the margins of the March 5 working conference "Improving  the quality of auditing by ensuring quality control of audit  activity".

As Armenian Finance Ministry Vardan Aramyan noted the department aims  to increase the competitiveness of local companies by maintaining the  proper level of financial reporting and accounting.

According to the head of the Office, Armenia's economy should be  oriented to the future - to become more competitive, export-oriented  and ready for investment. In this context, the role of planned  reforms in financial reporting and accounting is important. "The  planned activities will not only ensure the competitiveness of  companies, but will also increase confidence in local businesses,  thereby contributing to the process of attracting investment and  access to finance," said Silvi Bosutho.

According to Vardan Aramyan, the financial reporting area of the  accounting is permanently in the focus of attention of the Armenian  government. The logic of the Ministry of Finance's actions is simple:  if the government plans to develop export-oriented directions of the  economy, it should focus on the growth of companies that claim to  participate in global markets. To do this, first of all, it is  necessary to ensure the competitiveness of these organizations, which  requires competent and accurate financial management by maintaining  the proper level of financial reporting and accounting.

At the same time, according to Aramian, the government also has  something to work on. "It is impossible to lay all the responsibility  on the shoulders of just one business, and at the same time expect to  increase the competitiveness of local companies," he said. That is  why, as the head of the Ministry of Finance pointed out, starting in  2008, the agency jointly with the World Bank (WB) initiated radical  reforms in the sphere.  The beginning was established by the  establishment of a number of rules and standards - in 2013, the  Strategy for Action in the field of accounting and audit was  approved. Already in 2017, the Armenian government developed and  approved a strategy for reform in the sphere. With the support of the  World Bank, the Armenian Ministry of Finance studied the world  experience, consulted with specialists, carried out certain  calculations in order to identify the mechanism that will ensure the  formation of proper level of financial management and accounting  systems and financial reporting.

For these purposes, the Ministry of Finance, according to Vardan  Aramian, aimed primarily at reviewing the approaches to mandatory  audit. The philosophy is that, as the minister pointed out, companies  with public significance and a significant role in the economic life  of the republic should be subject to mandatory audit. "They should  have social responsibility to the society - to show that financial  management is conducted correctly, and the reporting is reliable and  reliable," Aramyan said. He reminded that for today audit is  mandatory for open joint-stock companies (LLC). If this LLC does not  function or does not function fully, the strict application of this  rule becomes impractical. Proceeding from this, the Ministry of  Finance plans to reconsider its approaches on the basis of the role  assigned to the company in the economic life of the country.

In addition, as Vardan Aramyan noted, the government, setting an  imperative on compulsory audit, should not forget about ensuring a  high level of services provided by auditors. For this, a control  system should be established. Having studied the market, the Ministry  of Finance has identified two models of qualitative regulation of the  sphere: the state itself controls the quality with its own resources,  and the second model for the formation of an accredited structure  that has all the necessary tools in its arsenal, assigning  qualifications to the auditor in the future will be responsible for  the quality of the services it provides.

In general, as the head of the Ministry of Finance noted, the agency  is aimed at reforms in four main areas - legislation, education, the  system of passing the improvement of professional skill of the  personnel and trainings. "The goal is to create a platform in  accordance with international quality standards," said Vardan  Aramyan.