Urazaev: Armenia and Kazakhstan are already working on the creation of joint ventures 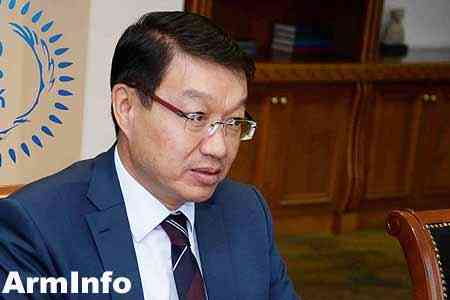 ArmInfo. Kazakhstan in trade and economic cooperation can offer Armenia nothing more than it can offer to other countries. The Ambassador of Kazakhstan to Armenia, Timur Urazaev, told ArmInfo on March 5 at a press conference in Yerevan.

"We often talk at various venues about the disparity in the level of trade turnover and the existing potential between Armenia and Kazakhstan in trade and economic relations, I'm saying this quite sincerely." As for the export of Armenian products to Kazakhstan, the first place is for wines, cognac products, and jewelry.  This is a great history and traditions of the Armenian craft culture. Armenia is also distinguished by its magnificent intellectual cadres: art, culture. We can list for a long time these high-sounding names in the history of Armenia, starting almost from the beginning of our era and ending with today's days ", - said Ambassador of Kazakhstan.

As for the trade of Kazakhstan with external countries, fortunately or not fortunately, according to the Ambassador, the official Astana has developed an export model and export opportunities, such as different types of raw materials, including large export opportunities for hydrocarbons and energy. But at the same time, according to Urazaev, Kazakhstan has a good export of grain and grain products, which requires further processing. "Kazakhstan has a lot of goods from medium-sized machine building - various kinds of machines, hoists, I list what is on the list of goods exported to Armenia." The equipment of various types - transformers, pumps, cardboard products, there are a number of other commodity items that can to find demand in the Armenian market. But, the trouble is, firstly, the Armenian market is small, and it is mainly our export-oriented enterprises with small volumes that can work on it .When the matter concerns the export of grain and hydrocarbon Then we are talking about completely different large volumes, which, because of geographical considerations, and transit transportation capacities, prefer our Russian partners, simply because they have the infrastructure and transport is cheaper," said Urazaev.

Another thing, according to the Ambassador, is that Armenia and Kazakhstan could interact outside the commodity trade, namely, in the sphere of trade in services, or through the creation of joint ventures with mutual investment in production. Urazaev noted that now Armenia and Kazakhstan are working on it.  According to him, the business communities of Armenia and Kazakhstan reduce to, for example, organize processing of agricultural products in the territory of Kazakhstan, create a joint venture with the participation of Armenian technologists and specialists and put production lines from Armenian companies.  "We could cooperate in the investment sphere, which we are offered by the Armenian government, in particular, investing in the tourist infrastructure of Armenia.

The market here is interesting, but it is also close, because investors from Europe, from Russia and other countries, with which it will be necessary to compete," Urazaev said. At the same time, the Ambassador reminded that the government of Armenia, as the priority direction of development, was marked by the sphere of information technologies. According to him, in this sense, held on the margins of the meeting of the Eurasian intergovernmental council in Almaty, the last forum, where the main topic was the digitization of the economies of the EAEC countries, should probably give a boost to Armenia and Kazakhstan sharing areas where you can take on the role of the so-called outsourcing for the digitization of individual industries. "The real kitchen of the EAEC is largely hidden from the eyes of a simple observer, but I look at all decisions made within the Union, they clearly show that digitalization is already going on in a number of directions and it will continue, and I am sure that Armenia can make a big contribution in this process, taking into account its capabilities in this field," the diplomat concluded.