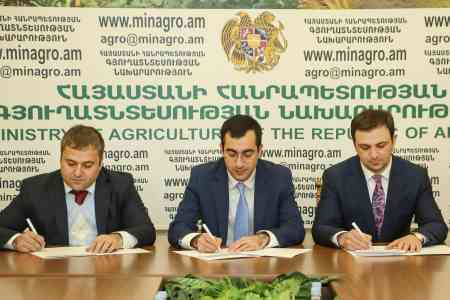 ArmInfo. The number of  participants in the state program of subsidizing interest rates on  agrocredits is being replenished - a memorandum of cooperation has  been signed with Converse Bank. As explained by ArmInfo in the press  service of the RA Ministry of Agriculture, a tripartite memorandum  was signed on March 15 by Deputy Minister of Agriculture Robert  Makaryan, head of the credit department of the Office for Economic  Development of Rural Communities Andranik Mkrtchyan and Corporate  Business Director of Converse Bank Rostom Badalyan.

Badalyan, for his part, said that the signing of the memorandum will  enable small farms to purchase agricultural machinery on preferential  loans, which will help further development of the agricultural  sector.  "Demand is, representatives of small farms are already  turning to Converse Bank," he said.

Mkrtchyan regarding the importance of the program stressed that low  interest rates on agrocredits will enable beneficiaries to deploy  more effective activities in the field of agriculture.

Within the framework of the state program of subsidizing interest  rates on agrocredits loans of 3-10 million AMD are issued at an  annual rate of 5%, and for border regions and agricultural  cooperatives the rate is 3%. Potential beneficiaries for applying to  financial institutions for a loan must previously undergo mandatory  training in the regional offices of the Agricultural Development Fund  and obtain a certificate.

Details can be found in the video:  https://www.youtube.com/watch?v=reSIEpwX-Yw&t=0s According to the  Financial Rating of Armenian Banks, prepared by ArmInfo News Agency,  the volume of agricultural credits as of January 1, 2018 reached  160.3 billion AMD or $ 331.1 million with annual growth of 6.3%. The  permanent leader in agricultural credit is ACBA-Credit Agricole Bank,  covering 47.4% of the total (or 76.024 billion AMD). Converse Bank on  the volume of agrocredits takes the 5th position - 7.012 billion AMD  or 4.4% of total agricultural banks. According to the annual growth  in agrocredit volume, Converse Bank takes the 3rd position - 51.7%.  (The calculated exchange rate of AMD as of December 31, 2017 was  484.10 AMD / $ 1).