The "Noah`s Ark" of Armenia is the best

ArmInfo. The "Noah's Ark", the first collector banknote of the Republic of Armenia, which was put into circulation on November 22, 2017 in celebration of the 24th anniversary of the national currency of the Republic of Armenia, has won "The Best Regional Banknote of the Year" award at the High Security Printing EMEA (Europe, Middle East, Africa), held in Warsaw, Poland in February this year.

According to Central Bank`s release, the prize has been awarded by Reconnaissance International, the organizer of the conference. Reconnaissance International is the leading global source of technical and business intelligence for secure documents, personal identification, authentication and anti-counterfeiting, tax stamps and currency. Its activities embrace the production of five industry-specific monthly newsletters (including the "Currency News"), the organizing of conferences and seminars, compiling of selected directories and industry reports, as well as providing strategic consulting for governments and businesses. 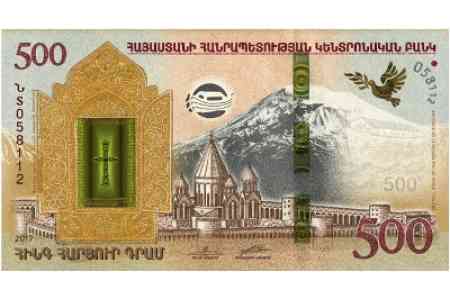 At the annual contest "The Best Regional Banknote of the Year", the banknotes issued during the year are to be chosen and offered by the high security printing community for taking part in the shortlisting process later. The award jury consists of the Board of Directors of Reconnaissance International, the conference organizers and the publishers of "ID & Secure Document News" and "Currency News".  Other nominations to the contest, in addition to the 500 Dram collector banknote "Noah's Ark", included: The new Israeli Shekel series  The new National Bank of Georgia 5 Lari note The new 10 Swiss Francs  The new Kyrgyz 2000 commemorative Som note Russia's new 200 and 2000 Rubles  The new Bank of Scotland ?10 polymer note Royal Bank of Scotland ?10 polymer note Bank of England new ?10 polymer note The new 50 Euros notes National Bank of Hungary new 1000 Forint note National Bank of Poland new 20 Zloty commemorative note Norway's new 100 and 200 Krone notes. 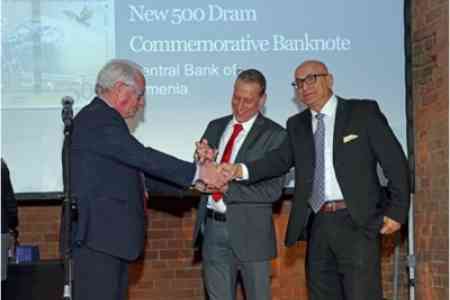 "The Best Regional Banknote Award" reaches the banknote or banknote series boasting the combination of a beautiful design, technical sophistication and smart security features, making visual artistry and high levels of technical and security sophistication key judging criteria, with considerable emphasis placed on reflecting the cultural heritage of the issuing country in the note, and the relevance of the overall design and symbolism to the issuing country.