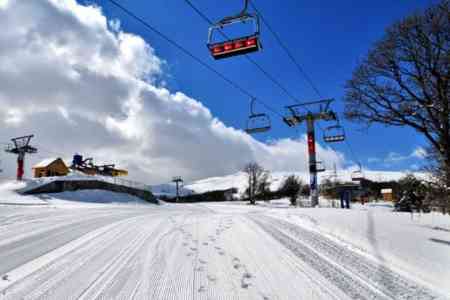 ArmInfo.The program for the  construction of a ski resort near the city of Vanadzor aims to  stimulate the "export of tourism" from Yerevan to the region. This  was announced at the April 6 press conference by the Governor of  Lori, Artur Nalbandyan.

Nalbandian noted that the program as a whole will contribute to the  economic revitalization of the region, creation of new jobs. "Despite  the fact that Lori is an industrial region, we have great prospects  for the development of tourism.This program fully fits into our  strategy for the development of the tourism industry for  2017-2025.The most important is that the ski complex will operate not  only in winter , but also in summer.In summer, tourists will be  offered alternative leisure options, "- said the governor.

In turn, the Director of Maimeh Resort Mher Baghdasaryan said that  about 1600 jobs will be opened in the region through this program.  The program itself promotes the development of mountain skiing and  ecotourism in Armenia. "Within the framework of this program, new  skating rinks will be opened in the alpine village under  construction, new hotels, cafes and restaurants will be built, a  school for mountaineering will be built, and a language center will  be opened in Vanadzor," Baghdasaryan said.

He also noted that the area for the construction of the resort was  carefully studied, all indicators were taken into account - the  amount of precipitation, solar lighting, and the landscape. "Since  not all tourists who come to the ski resorts initially know how to  ski, we chose a landscape that will be convenient for beginners and  extreme sports lovers.At the top of one of the mountains on which the  restaurant will be built, a magnificent view of Ararat, Aragats,  Sevan, as well as Elbrus, "Baghdasaryan said.

Baghdasaryan said that at the moment the area on which the resort is  built is 584 hectares, however, since this direction of tourism is in  demand all over the world, in future it is planned to increase the  territory.  Investments in this program to date amount to 14.4  billion AMD. According to the director of ZAO Maimeh Resort, the  resort will be able to receive about 2,000 tourists a day, which will  promote the revitalization of the hotel business in Vanadzor.  According to Baghdasaryan, the resort will be ready to receive  tourists as early as December 2019.