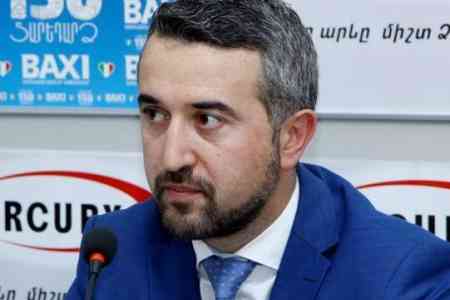 ArmInfo. Russia has always been and is considered the main tourist market of Armenia. Armenia still has something to show and pleasantly surprise the Russian tourist.  Executive director of the Armenian Tourism Development Fund Ara Khzmalyan stated in an interview with ArmInfo.

Mr. Khzmalyan, how can the Armenian tourist market be of interest to a Russian experienced tourist?

Armenia is attractive for the Russian tourist, first of all, for its hospitality. Here, Russians feel comfortable, also due to language barrier absence. Historical ties play an important role. That is, a Russian person in Armenia does not feel as foreigner: he is always welcome, he is always free in his behavioral manifestations. Russian tourists like Armenian cuisine, local wines and brandy. The Yerevan Brandy Factory (YBC) constantly organizes cultural evenings with the participation of authoritative people from Russia, which contributes to the improvement of the general knowledge about Armenia.

Certain steps have already been taken to stimulate the tourist flow to Armenia. Since February 23, 2017, Russian citizens have been able to enter Armenia through their internal passports. In 2016 453.5 thousand tourists arrived against 443 thousand a year earlier, then in 2017, Armenia was visited by 584,6 thousand tourists from Russia, more than 50 thousand of them by internal passports. At the same time, Armenia still has much to do to attract tourists from Russia.

After all, in an way, when speaking about Russian market, we understand Moscow and St. Petersburg.  However, Russia is a huge, including northern, very rich regions. In order to attract a tourist from the North, we plan to implement serious marketing projects.

First, we decided to activate the Armenian community in the Russian North: organize presentations for representatives of the tourism industry, showing potential tourists all the charms of Armenia - restaurants, cultural institutions, city life, historical and natural sights. We believe that all this should be told and shown, and I am confident that this will be of great interest to a potential tourist, especially a resident of the northern regions.

At this stage, we are working with the Tashir Group, which provides us with a platform for outdoor advertising (banners, commercials) in all cities where they have relevant sites. I think that by May promo videos will be shown in Russian cities.

In the issue of stimulating the interest of the tourism industry in relation to Armenia, we are focusing, among other things, on harnessing the potential of the Armenian Diaspora in Russia, and this is not only the financial assistance of patrons of Armenian origin, but also the well-deserved reputation of famous Armenians in business and cultural life in Russia. All this is the best advertising, promoting the recognition of Armenia.

In September 2018, we plan to launch a tourist project "Russian Footprint", which is aimed at deepening the sense of comfort of a Russian tourist in Armenia. To this day, when we talked about the comfort of a tourist, we basically meant infrastructural elements. But the very concept of "comfort", in the first place, presupposes its psychological component. Thus, introducing the Russian culture in Russian territory, the objects of cultural heritage, stored in our museum funds, we provide him with psychological and mental comfort. In the same Matenadaran ancient Slavic manuscripts are kept, in the National Gallery there is a unique collection of works by Russian artists. That is, to show it all, to present it, and I am sure that it can become a source of additional comfort for a Russian person.

The presentation of this tourist product will be held with the support of the leadership of the State Russian Museum of St. Petersburg. We found a very interesting clue for this: it turns out that the director of the Russian Museum, Alexander Miller (supervised the museum in 1918-1922), in 1914-1916, worked on the creation of the ethnographic department of the Russian Museum, and in 1916 from Vaspurakan, Van (Western Armenia . Ed.) moved to St. Petersburg a lot of Armenian artifacts. They were kept for a long time in the Russian Museum, after the creation of the Ethnographic Museum much was transported there.  And it turns out that it is in the current year - 2018, when the 100th anniversary of this event is celebrated - that we have the opportunity to implement the "Russian Footprint" project. In addition, an exhibition of works by Armenian artists, which are stored in the museum's funds, is also planned. Within the framework of the event, with the assistance of the Tourism Committee of St. Petersburg, we plan to collect the entire tourist industry.

Mr. Khzmalyan, are there plans to create Armenian cultural centers in various regions of Russia that would act on a permanent basis and, perhaps, would go out on self-reliance? After all, it is one thing to develop a tourist product and to show promotional videos within a year, and it is quite another to work permanently in this direction.

For now we plan to create information centers. For example, in Surgut, where there is a very strong Armenian community. This will allow to permanently inform these cities. As for cultural centers, we can say that many cities in Russia already have such centers, but there are certain gaps with the coordination of their activities. There is a task to expand their functions, organize the work more professionally - that is, put them on the right track, because today they work in the format of "amateur clubs." We did not have time to work seriously with them, since we focused on the organization of the work of information centers in Russia and on the territory of Armenia, which will assist the Tourism Development Fund in consolidating the tourist potential of a particular city or region, becoming a branch of the Foundation. It is through the information centers that we plan to receive the necessary messages - that interests It is very important for planning further steps, but we will also work on reorientation of cultural centers operating in Russian cities, because the purpose of our fund is the implementation of professional marketing activities and the creation of a network , capable of working on this, and, since public funds are not enough for this, we have already secured the support of patrons. By the end of the year we will be able to present a more concrete picture.

I emphasize that the main mission of the Foundation is not to establish contacts in the B2B format - Armenian and Russian tour operators somehow work with each other, but in a global sense to raise the recognition of Armenia as a tourist destination. Basically, it was with this mission that the Foundation was established.

If you try to make a portrait of a Russian tourist in Armenia - what is he like? How he looks and behaves ...

Our research shows that mostly young people come to Armenia. They visit Armenia by families, as part of corporate leisure, when they are going to be friends. We realized that in parallel with the increase in the level of recognition of Armenia as a tourist destination, people began to visit the republic themselves - without the help of tour operators - they themselves book rooms in hotels, make their own itinerary. That is, we must seriously work on them - on individual tourists.

In addition, a Russian tourist in Armenia is a tourist with an average and high income level. He knows Europe very well, travels a lot and therefore is interested in new directions, because he is tired of European attractions. He is interested in a warm, easy communication with the common people. He is also interested in adventure and ski tourism. In this regard, we do not compete in the international price market - Armenia positions itself in nature, culture and people.

As a result of the planned PR actions, how much do you plan to increase the flow of tourists from Russia to Armenia?

For today it is very difficult to calculate, because we have a serious work in terms of statistics. The State Committee for Tourism is currently taking this task very seriously and is trying to improve the statistical data system, since only having accurate statistics on our hands, we can more effectively plan further steps. I think before the end of 2018, the system will be ready.

At the same time, do not think that we are concentrated only on the Russian market. We participate in many authoritative tourist exhibitions, we organize Road Show, presentation in various cities of the world. We are doing serious work to diversify the market, we will soon create a network of our representatives who will work on marketing activities. That is, with the support of our philanthropists, with reasonable state policy and professional implementation of the planned policy, I am sure that we will achieve great success in the sphere of tourism.