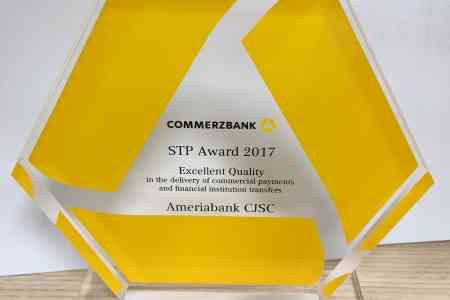 ArmInfo. Ameriabank was awarded the prestigious "Excellence of Quality" award for the 10th time - now STP Award 2017. As the press service of the Bank told ArmInfo, the award was awarded to Ameriabank-correspondent bank of the Commerzbank AG in 2017 for the highest quality of international transactions. Commerzbank presents this award annually to its best partners in various countries.

According to the source, in cooperation with correspondent banks Ameriabank carries out all international transfers in the form of STP (Straight Through Processing) - it is compliance with payment formatting standards, which allows their execution in automatic mode without manual processing, which ensures the maximum speed of transfers.

Ameriabank JSC is a universal bank that provides investment, corporate and retail banking services in the form of a comprehensive package of banking solutions. The bank has been operating in the Armenian market since October 31, 1996. The branch network of Ameriabank includes 14 divisions, out of which 9 are metropolitan and 5 are regional ones. In the share capital of Ameriabank, with the entry of the European Bank for Reconstruction and Development in December 2015, the equity participation has changed as follows: Ameria Group CY Ltd. - 65.8%, EBRD - 20.7% and ESPS Holding Limited - 13.5%.