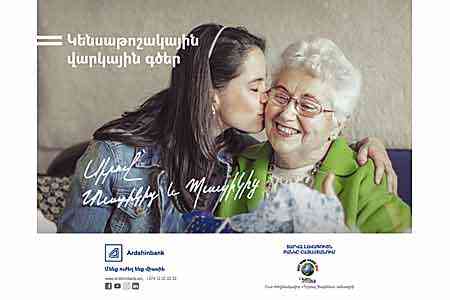 ArmInfo. Ardshinbank offers  preferential terms for obtaining pension cards. As the press service  of the Bank told ArmInfo, differing specially discounted tariffs for  pensioners, these cards become safer and more profitable when they  receive pensions. Issue and maintenance of these cards is free of  charge.

"By means of a pension card, pensioners are able to receive a credit  line with a reduced limit without an annual interest rate. The credit  line is granted a maximum of three times the amount of the pension,  with a maturity of up to 50 months. From the customer only a  contractual amount of 2% is written off, which is fully directed to  repayment of the loan and a monthly service fee (1% of the contract  amount of the credit line), "the Bank reported.  To obtain a pension  card, you must apply to any branch of the Bank, submitting only your  passport, social card and pension book.  More detailed information  about pension cards and credit lines can be obtained by clicking on  the link https://goo.gl/cKZWMu, https://goo.gl/hom6UB, or by calling  the 24-hour (012) 222222 number.  According to the 16th issue of the  analytical survey "Armenian Banks in the Card Business" prepared by  IC ArmInfo, Ardshinbank is one of the top five leaders in the total  number of active cards - over 172,000, and the total volume of  plastic transactions - about 103 billion AMD for 9 months of 2017,  and only by the volume of ATM transactions the position in TOP-3 is  maintained - over 97 billion AMD. According to the number of pension  cards Ardshinbank is also included in the TOP-5 - about 26 thousand  units on October 1, 2017 with an annual growth of 30.7%. In the  pension project, the bank uses international Visa and MasterCard.  Ardshinbank has 154 ATMs and 342 own POS terminals. Ardshinbank also  issues international Visa and MasterCard simultaneously with local  ArCa cards.  To note, Ardshinbank was founded in 2003. The majority  shareholders of Ardshinbank as of January 1, 2018 are Arins Group LLC  (this is renamed the Business Investment Center LLC) with a 67.97%  interest in the capital and 29.52% in the REGION Industrial and  Financial Corporation JSC. Ardshinbank is the second largest bank in  Armenia, having one of the largest branch networks, consisting of 64  divisions.  Ardshinbank is the only private institution in Armenia  that has been assigned ratings of two international rating agencies  (Moody's and Fitch) equal to Armenia's country rating.