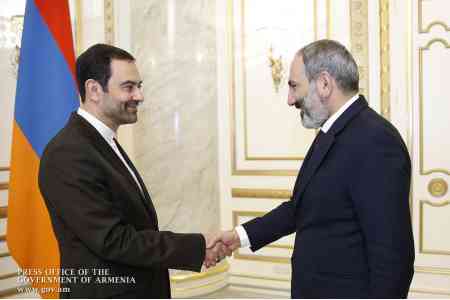 ArmInfo. Prime Minister of Armenia Nikol Pashinyan stressed the importance of the natural development of the Armenian-Iranian relations during the meeting with the Ambassador of Iran to Armenia Seyed Kazem Sadjadi. The press service of the Armenian government reports.

He expressed conviction that due to joint efforts the bilateral cooperation will be given a new dynamic.  "We will do our utmost to further develop bilateral relations and are interested in giving a new impetus to the Armenian-Iranian contacts, based on mutual benefits," the Armenian prime minister said.

The Iranian Ambassador stressed the need to realize the serious potential existing in bilateral relations, and added that there are all the makings for expanding and deepening economic contacts. According to the diplomat, the activities of the Free Economic Zone in Meghri, as well as the existence of a temporary agreement on free trade between Iran and the EAEU, will also contribute to this.

The interlocutors discussed issues related to the expansion of interaction between FEZ Meghri and Aras, deepening contacts in such areas as energy, health, agriculture, road construction. The sides also stressed the importance of taking steps to further develop cooperation in the field of tourism, and in this context, the improvement of infrastructure and the implementation of a regular flight. The parties also touched on the implementation of investment projects.