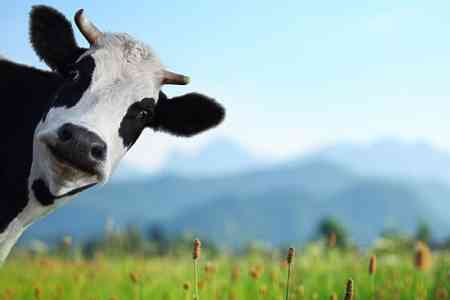 ArmInfo. Dozens of farmers gathered outside the Armenian government building, protesting against low procurement prices for milk. If in the winter period prices kept at a  level in the range of 180 - 230 drams per liter, today they reached  150-140 drams. In the meantime, as they told ArmInfo correspondent,  in order to "not sink" and somehow "stay afloat", the purchase price  for milk today should not be less than 160 drams. Otherwise, they  threatened with the delivery of milk to Yerevan with cisterns and  free distribution to its residents as a charity gesture.

According to Martun Poghosyan, a resident of Geghashen village,  Kotayk region of Armenia, in the winter, up to the end of February,  the enterprises bought milk at a price of 200-230 AMD. As early as  May, the price dropped to the level of 150-160 drams per liter and  today it has fallen to the critical for the villagers 110 drams.  Meanwhile, according to him, in the same period of 2017, the purchase  price was 160-180 AMD. "Only one or two enterprises buy milk at a  price of 140 drams. But if the cost price of milk for us, villagers,  taking into account all expenses, is about 120-130 drams, then we  should sell it at least 140-160 AMD, so as not to be in big minus,  "he said.

Meanwhile, as the head of the procurement department of the  Ashtarak-Kat company Hayk Sargsyan stated in a conversation with  ArmInfo, which accounts for almost a third of the market for  whole-milk products, the same picture is observed year after year-in  the winter months the cost of milk rises and then gradually  decreases. But even with this in mind, in the winter of this year the  enterprise bought milk at a price of 180-190 AMD per liter, and not  200, as farmers say. As explained by Sargsyan, other companies could  have bought at this price, but those that work with small farms.  Already in May 2018 "Ashtarak-kat" company bought milk from the  manufacturer for 170 AMD, today's price is 150 drams, the day after  tomorrow will reach 140 drams. But there is no need to talk about  price increases. As the representative of the company assured,  already today there is an overabundance of milk, and the company  stores it, making cheeses and processing it into milk powder.

Another large dairy company, LLC Marianna, whose experts contacted  ArmInfo correspondent for comments, today buys milk for 140 drams,  last year, in the same period the price was lower - 130 drams per  liter. At this stage, as the employee of the company's accounting  department Advine Aristakesyan stated, although there is a surplus of  milk on the market, the company continues to buy milk from farmers so  that they can cover their expenses and financial obligations. The  Producer understands that the most critical for the farmer are  May-June months. Further, as she noted, the prices are gradually  adjusted upwards.

Nevertheless, in the Ministry of Agriculture of Armenia ArmInfo was  assured that in order to resolve the current situation within the  next two to three days the issue will be submitted for discussion to  the departmental collegium, where all interested parties will be  invited - farmers, procurers and manufacturing enterprises.

According to the expert estimates, Armenia's self-sufficiency in milk  is 93%, and the average milk consumption is 257.7 kg per person per  year. Small farms dominate the structure of production.