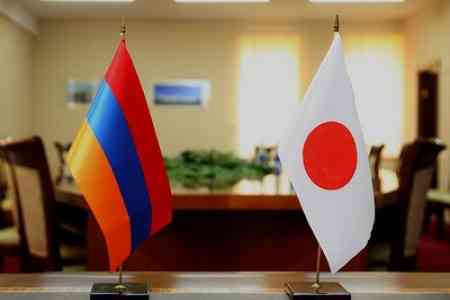 ArmInfo. Atom Janjughazyan, the Minister of Finance of Armenia and Ambassador of Japan to Armenia, Jun Yamada, discussed the possibilities of development of cooperation between the two countries.

As the press service of the Armenian Ministry of Finance told  ArmInfo, the head of the department presented the economic agenda and  priorities of the government to the ambassador. June Yamada, in turn,  said that sharing experience in the field of pension provision and  social welfare of the population will help improve the targeting and  effectiveness of the programs implemented.

The interlocutors also touched upon the soil agreement concluded  between the governments of Armenia and Japan aimed at preserving the  cultural heritage of the Republic of Armenia. They also discussed the  agreement on the establishment of an IT center in the Armenian  village of Ghukasavan as part of the Grant Assistance for Grassroots  Human Security Projects (GGP) grant program, aimed at ensuring the  safety of children, students, and their teachers through  notification.

Earlier, in February this year, it was reported that the Japanese  government will provide Armenia with a grant of $ 654,000 to restore  and preserve the archaeological heritage. According to the press  service of the Armenian Ministry of Culture, the grant of 69.7  million yen (about 654 thousand USD) will solve the problems of  preserving the archaeological values collected in the funds of the  Research Center for Historical and Cultural Heritage, as well as  using the best methods in the reconstruction of architectural  monuments. "The laboratory of the center, engaged in the restoration  of archaeological finds, will be equipped with the latest equipment,"  the report said.