Subsoil users: Any deviation from normal work adversely affects the  development of the Armenian economy 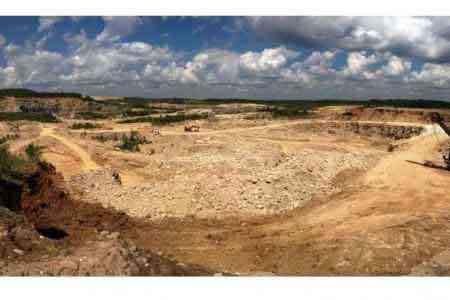 ArmInfo.  On July 17, RA Prime  Minister Nikol Pashinyan instructed Deputy Minister of Energy  Infrastructures and Natural Resources of the Republic of Armenia  Vardan Gevorgyan to meet with specialists of the Ministry with the  participation of members of the Union of Subsurface Users and  Metallurgists of Armenia.

According to the ministry, during the meeting issues that required  urgent decision in the sphere of mining industry were discussed.  Representatives of the Union presented the problems of the sphere,  stressed the need to attract investment and the deployment of  unhindered activities. The participants of the meeting noted the  importance of forming a positive public opinion in relation to the  mining industry and noted that it is necessary to make explanatory  work, speeches, organize press conferences. Representatives of mining  companies noted that most companies - subsoil users are large  taxpayers and employers, and therefore any deviation from normal work  adversely affects the development of the country's economy and leads  to a decrease in budget revenues. The subsoil users expect through  the dialogue of the state with the society to contribute to the  organization of the normal operation of one of the industries that  are of key importance for the Armenian economy.

Immediately after the "velvet revolution" and the change of power in  the country, mass actions began in Armenia aimed at hindering the  activities of mining companies. Prime Minister Nikol Pashinyan also  touched upon this topic. On July 5, during a trip to Syunik region,  he said that, with the necessary facts, the Armenian government will  take a decision on the mining sector. The head of government stressed  that in Armenia the depths of the country were being destroyed, and  the economic growth of the country was linked with the world prices  for copper. "I think this is a problem, but I do not think that the  mining industry should be shut down. I gave instructions to conduct  research on all polymetallic deposits to ensure they are in  compliance with environmental standards. "I ask you to give us the  opportunity to gather facts on the basis of which it will be possible  to make decision. I, as prime minister, do not have the right to just  make decisions about closing a mine. To make a decision it is  necessary to collect facts that must be undeniable," Nikol Pashinyan  stressed. He added that he does not have any corrupt obligations with  any of the mines.

At the state balance of mineral resources at present more than 670  deposits of solid minerals with confirmed reserves, including 30  metal deposits, are registered. About 400 of these deposits are  exploited, including 22 metal ones. There are 7 copper-molybdenum  deposits, 4 copper, 14 gold and gold- polymetallic deposits, 2 iron  ore and 1 aluminum ore on metallic minerals. Armenia also occupies  one of the leading places in the world for the richness and diversity  of nonmetallic ore reserves. According to independent observers, the  previous authorities had special agreements with subsoil users who,  using their offshore companies, sold them ore concentrate at a low  price. And those, in turn, resold it at market prices to end-users.  Thus, the republic received less than half of the proceeds from the  sale of minerals. This predatory mechanism, as a rule, is blocked in  international practice by a high level of royalty, which makes the  use of such schemes unprofitable. In Armenia, in connection with  non-gratuitous agreements with the previous authorities, the level of  royalties was extremely low, which created a favorable ground for  concealing the real incomes of companies and the active use of  offshore schemes for this.