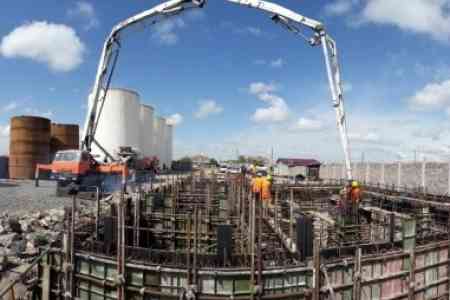 ArmInfo. Armenian Minister of Economic Development and Investments Artsvik Minasyan on August 9 presented the investment program of Armoil company on construction of a crude oil processing plant in the town of Yeghvard in the Kotayk  region, asking to prolong the previously adopted government's  decision to grant a deferment on payment of import customs duties on  technological equipment in the framework of the investment program.  The government considered the draft decision, and in view of the  environmental tasks, decided to postpone its adoption for a week.

As the Minister pointed out, 250 new job places will be opened in the  framework of the investment program instead of the current 100. At  the same time, according to the Minister, a certain unpleasant  attitude towards the plant has been formed in the society, since  there is a wrong opinion that instead of a plant for processing crude  oil, construction of refinery is planned, which does not correspond  to reality.

Meanwhile, as Prime Minister Nikol Pashinyan noted, before the  meeting of the government, he became aware that the nature protection  and inspection body on mineral resources had decided to stop the  construction of a small oil refinery in the town of Yeghvard, Kotayk  region (on July 16, ed. note).  "Do we have information related to to  the assessment of the impact on the environment?" the Prime Minister  asked.  In response, the Minister of Nature Protection Erik Grigoryan  stated that the inspection body carried out research and suspended  construction of the plant. At the same time, research was carried out  on the construction of an oil refinery, and not a plant for  processing raw materials, in connection with which there is a legal  gap. Nevertheless, the plant did not receive positive results of  expertise and environmental impact assessment.  As a result, even  despite the proposal of Deputy Prime Minister Tigran Avinyan to  approve the project, and then try to solve the problem with the  environmental department, Nikol Pashinyan proposed to postpone for a  week the approval of the company's application for deferment of  customs payments on imported goods.  "The environmental concept  should be very clearly set in the core of our actions. This does not  mean that there will be no refinery in Armenia, however all the  actions should be exclusively within the framework of the law," he  concluded.

To recall, earlier within the administrative proceedings launched on  July 10 in the inspection body, it was found  out that Armoil CJSC  had not carried out an environmental impact  assessment in accordance  with the RA Law on Examination and  Assessment of Impact before the  construction of an oil refinery in  the Nati district of Yeghvard,  Kotayk region. On the basis of the abovementioned, on July 16  head  of the Nature Protection and  Inspection Body on mineral resources  Artur Grigoryan, decided to stop the construction of the oil refinery  until a  positive response based on the documents on the relevant  expertise and environmental impact assessment are ensured.  Almost  ayear ago on October 18, 2017 the inspection body had already made a  decision to stop the construction of the plant. It was that time the  company was obliged to make an expertise and strategic evaluation of  environmental impact.

However, on March 22 in a talk to ArmInfo's correspondent General  Director of the company Alfred Abadi stated that already in two-three  months the oil refinery plant in Yeghvard wil become a reality.  , he said.

Meanwhile, back in March 2016, in an interview with ArmInfo,  the  general director of Armoil (the official representative of the   Lubreks brand in Armenia and the CIS countries and importing engine   oils from the UAE-ed.note) Alfred Abadi noted that the main goal of  the  company is the production of petroleum products with labeling  "Made  in Armenia".

The investment package was supposed to be initially implemented in  three stages, the total volume of investments - $ 35 million. The  first stage of the project involves the construction of an oil  refinery in Yeghvard. According to the business plan, the production  capacity of the enterprise for the first time will amount to 15   thousand tons of engine oil and 6 thousand tons of tar per year. In  the future, the plant will also have the opportunity to process used  engine oil and use it as raw materials, which in turn will help  maintain the cleanliness of the environment and ecology.  The company  intends to produce production amounting to 100 million drams for  selling on the domestic market alone. The plant, whose area is 5  thousand square meters with further expansion to 15 thousand square  meters, will also have underground and land bases, which are  necessary for storing 4  thousand tons of diesel fuel, 2 tons  bitumen, and 2-3 thousand tons of raw materials for the production of  various oils, as well as 20  thousand tons of finished products.  About $  15 million were to be invested to implement the first stage  of the program (it was planned to be completed in August 2016),. The  whole program was planned to be completed within three years.