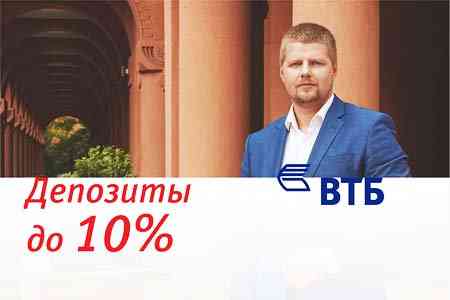 ArmInfo. VTB Bank (Armenia), in order to maximally improve the conditions and increase the profitability of its clients' deposits, offers increased rates for annual AMD deposits- to 10%.

As the press service of the Bank reports, the deposits can be issued  by individuals who are residents and non-residents of RA for a  maximum period of 730 days. At the request of the client, the amount  of interest can also be credited to plastic cards of international  payment systems MasterCard and Visa, which the Bank provides to  depositors as a gift and without a monthly commission for servicing  during the entire period of the deposit.

"Already now clients can start saving money to start a family, for a  risk-free future, a carefree life, and the Bank will in turn increase  customer funds in the form of interest payments. Thus, the Bank has  created the most favorable conditions for reliable and profitable  storage and increase of savings at all stages of life, "the source  noted.

Starting from August 15, 2018 the bank launched a new advertising  campaign on deposits, a video of which can be viewed at:  https://www.youtube.com/watch?v=McPs0kYwOe8 One can get more detailed  information on deposit conditions at the Bank's branches, on the  website www.vtb.am and in the Information Service on the number  87-87.

According to the Financial Rating of Armenian Banks prepared by  ArmInfo, the portfolio of time deposits of VTB Bank (Armenia) as of  January 1, 2018 amounted to 99 billion drams, of which 85.6 billion  are individuals' funds. In the structure of the Bank's liabilities,  the share of time deposits is 56.4%. On the portfolio of time  deposits in general and time deposits of individuals, in particular,  the Bank is among the top ten. (The calculated exchange rate of AMD  as of December 31, 2017 was 484.10 AMD / $ 1).  To note, VTB Bank  (Armenia) CJSC became a participant in the international financial  group VTB in April 2004. At present, VTB Bank, the second largest  bank in Russia, owns 100% of VTB Bank (Armenia). The Bank is  traditionally one of the leaders of the banking system in Armenia in  terms of key indicators. In terms of coverage of the branch network,  VTB Bank (Armenia) holds the leading position - 67 branches with  presence both in the capital and in all regions of the country.