Prime Minister: We need such economic growth, every percentage of  which will be tangible for the population 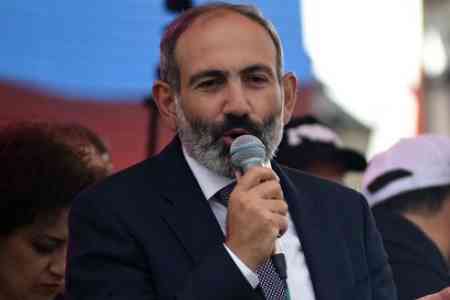 ArmInfo. The indicator of  Armenia's economic activity continues to grow, Prime Minister of  Armenia Nikol Pashinyan wrote on his Facebook page.  The Prime  Minister presented the data of the National Statistics Service,  published today, according to which economic activity demonstrates  double-digit growth in July this year, amounting 11.1%, against a  background of no less high level in June - 9.6%.

As Pashinyan noted, in January-July of 2018 the indicator of economic  activity was 9.3% against the background of 8.9% for January-June.  "As I noted on August 17, the government's priority is to change the  structure of economic growth. We need such economic growth, each  percentage of which will be tangible for the population. But, at the  same time, in this light the government should conduct a balanced and  careful policy, in order to avoid economic shocks. I am glad that  this policy gives its concrete results, "he said.