Manaseryan: in 2018 Armenia may exceed the envisaged indicator of economic growth by half 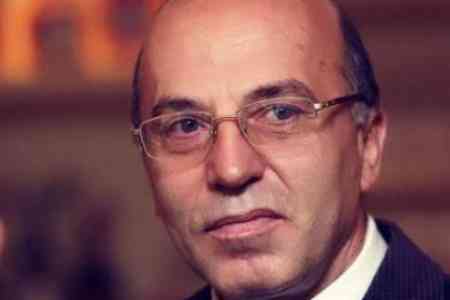 ArmInfo. The tendencies of development in the Armenian economy in January-June of 2018 can be estimated as unique and deserve much more thorough research than a simple analysis of economic growth indicators. This is stated in a study by Tatul Manaseryan, a doctor of economic sciences, member of the Eurasian Expert Club, on the topic "Armenia's economy in the first half of 2018 in the context of membership in the Unified Energy System", announced today at a press conference.

According to the expert, the fact that the "velvet revolution" not only did not lead to serious shocks in the country's economy, but also accelerated many positive processes - increase of confidence in the new government, in the banking system, which is reflected in the growth of the number of deposits, is unprecedented. In addition, the "velvet revolution" significantly increased the effectiveness of economic transformations.

For the first time, as noted in the report, after the global financial crisis, all economic indicators have a positive trend. In general, the indicator of business activity in January-June of 2018 compared to the same period of the previous year increased by 8.9%.  It is noteworthy that economic activity in June of this year by June of last year increased by 9.6%, and in May economic activity grew by 5.4%. At the same time, the growth in the volume of industrial output amounted to 3.7%, and the total volume of agricultural output - 5.5%.  Record growth was registered in terms of construction - 13.5%. Also high - double-digit growth (18.1%) is registered in the services sector (without trade - 9.1%). On the other hand, the growth of the consumer price index was only 2.4%, which is estimated within the limits of the norm. In absolute terms, for the reported period the volume of industrial output made about 805 billion drams, and the turnover of domestic trade amounted to 1 257.7 billion drams, services - 777.7 billion drams, the volume of gross agricultural output - 269, 7 billion drams and construction sphere - 127.8 billion drams.

The overall reduction in poverty, according to the expert, is also significantly facilitated by the growth of incomes of the population.  In particular, the average monthly wage increased by 4.4%. Foreign trade has significantly increased, in part, due to the intensification of trade and economic ties with the EAEU countries.  The growth of foreign trade turnover amounted to 28.9% ($ 3 476.1 million), including - exports grew by 20%, and imports - by 33.9%.

Armenia's gross domestic product in April-June 2018 (during and after the revolution) increased by 21.7% compared to the first quarter of 2018, and the overall growth in the first half of 2018 compared to the same period last year was 7.2 % [2]. In the first half of this year, Armenia's GDP totaled 2.5 trillion. drams or about 5.1 billion dollars. For comparison, Armenia's GDP in the first half of 2017 amounted to 2.2 trillion.  drams or 4.5 billion dollars. In the structure of semiannual GDP, manufacturing industry amounted to 11% or 282.3 billion drams, trade - 11% or 276.6 billion drams, real estate - 10% or 240.3 billion drams, agriculture - 9% or 229.3 billion drams. It should be noted that according to the Central Bank of Armenia, GDP growth in 2018 will be 4.5-6.5%, and according to the World Bank estimates - 4.1%. The new government, according to the expert, believes that high-tech production can become the locomotive of the Armenian economy and that the country has prerequisites for the development of this industry and an interest in investments. On the example of the "Engineering City" high-tech production is represented in the country. The "engineering city" is created within the framework of public-private partnership. The program provides for the training and retraining of 1,500 highly qualified specialists in the industry, the creation of 2,000 new jobs, the establishment of start-ups, the increase in efficiency of organizations and the increase in exports. For the project, an area of 3.0 hectares was chosen. In particular, great importance is attached to the production of panels for solar energy stations. At present, there are certain opportunities and investment interest in the production of TVs and household appliances in Armenia. Also, according to Manaseryan, there are opportunities to turn Armenia into a high-tech country, which will lead to the creation of natural conditions for the development of the military industry aimed at enhancing the

country's defense capability, which in turn will also positively affect the creation of new jobs with high wages. Consequently, there is a need for the development of the information technology and experimental production. Armenia can promote the development of biotechnology.  From this point of view, the sphere of pharmaceuticals is also considered to be perspective. According to Manaseryan, confidence in the government is also reflected in the financial system. Only in three months the credit portfolio of Armenian banks increased by 99 billion drams. After the revolution, there are quite high indicators of economic activity. Already in June, which was the first post-revolutionary month, a 9.6% increase in economic activity was recorded and there is every reason to assert that the indicator of economic activity in Armenia will continue to grow. In Armenian banks deposits increased by 116 billion drams or approximately $ 250 million. These are deposits of both individuals and legal entities, which, according to the expert, indicates that Armenian citizens and representatives of the Diaspora have confidence in future economic growth. During the first half of the year, Armenia exported as much fruit and vegetables as it did last year. At the same time, Russia accounts for the bulk of exports.

In addition, over the past three months alone, the government and tax authorities have raised more taxes by 28.8 billion drams compared to last year, the number of overpayments decreased by 26 billion drams.  According to Manaseryan, Armenia's membership in the EEMP contributes to the positive trends in the economy. However, as he stressed, the existing economic model of Armenia is unprofitable. The same can be said about corruption, the fight against which has received quite impressive support in the society. One of the main achievements of Pashinyan's government, according to Manaseryan, was a significant increase in the level of final execution of all budget items and a sharp reduction in the level of corruption of government officials in most social programs that are subsidized from the budget. "Earlier, and this was not a special secret in Armenia, these funds were simply stolen, or reached the addressees in a reduced form." The same concerns the expenditures of the budget in the defense sphere, which for decades were virtually uncontrolled. In the past few years, oppositionists, international organizations and experts have spoken to various directions in the course of recent years, assessing it as a whole at about $ 1 billion (with a budget of $ 2.5 billion), "the report says. The result of the new policy, according to the economist, is a positive balance between arriving and departing citizens of Armenia, which from May 10 to August 14 was almost 30 thousand people. "It is possible that this estimate is premature, but after 10 years of negative migration balance it was simply impossible not to mention it. If in the first half of this year the difference between those who arrived in Armenia and those who left Armenia was 6,146 people, for the same period last year was 37,600 people, "he said.

According to Manaseryan, there are also obvious positive trends in attracting capital from the outside. For the first time in many years, the volume of raised funds by 11 billion drams (about 23 million dollars) exceeds the amount of capital withdrawn. Although this figure is small and unstable, but this is a positive new in the financial sector of the country. With regard to private transfers, the volume of income from abroad only for the second quarter of 2018 decreased by 963 million US dollars, or by 55.02% compared to 2017.  Thus, the analysis of the dynamics of the main macroeconomic indicators suggests that, if the existing trends persist, Armenia will be able to record higher economic growth rates in 2018, in particular, within 7.5-8%.