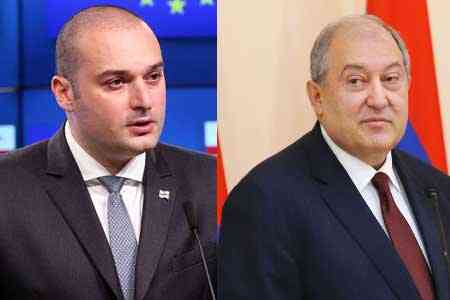 ArmInfo.Armenia and Georgia today enter into such a stage of the latest history that can be characterized like fraternal and affiliate. Armenian President  Armen Sargsyan stated this on September 10 during a meeting with  Georgian Prime Minister Mamuka Bahtadze.

According to Armenian press-service, Armenian President Sarkisyan  expressed conviction that this serious historical wealth creates  opportunities for outlining new areas of interaction for the  partnership and their implementation. "Today our political relations  are at a high level, but there is a serious untapped potential,  especially in the economic sphere. I am sure that your visit will  give a new impetus to the process of raising our relations to a new  level," the Armenian President said.

In turn, the Georgian PM noted that this year is symbolic both for  Armenia and for Georgia, as both countries celebrate the 100th  anniversary of the proclamation of Independence. "Our political  relations, as you have already noted, are at a high level, but in the  economic sphere there is really untapped potential.  Today, with my  partners, we spoke in detail about the ways of cooperation," he said,  adding that in the near future a meeting of the Armenian-Georgian  intergovernmental commission will take place, on which the ways of  economic development will be outlined.  At the meeting, the parties  noted that there is a serious field between the two countries for  cooperation and mutual desire to expand interaction. At the same  time, they emphasized the importance of implementing joint projects  in the scientific, educational, IT, and other spheres of the economy.