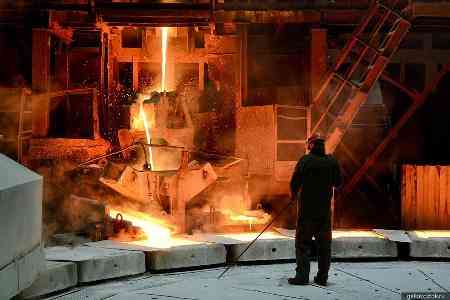 ArmInfo. issued  a statement about the reasons for the shutdown of the Alaverdi Copper  Smelter, owned by Armenian Kopr Program CJSC (ACP is a member of the  Vallex group of companies).

According to the information, on October 19, the work of the Alaverdi  copper smelter was suspended - the 4th time during its 250-year  history. "The suspension of the activity of ACP has a number of  reasons," the statement said.

In particular, as of October 1, 2017, the enterprise's annual  emissions of sulfur dioxide amounted to about 38 thousand tons,  despite the permissible level of 5,600 tons. "The company paid 323  million drams to the budget against the above-mentioned emissions,  and 340 million drams from January-September 2018. Part of these  funds in the manner prescribed by law was returned to neighboring  communities as compensation for environmental losses. At the same  time, the cause of these emissions is technological, the only  solution of which may be the construction of a modern copper smelting  plant, which requires large investments based on the existing plant,  - said in a statement.

The company recalls that the State Inspectorate for Environmental  Protection in August 2018 fined the plant another 380 million drams  ($ 700,000) due to the results of inspections because of a serious  violation of environmental legislation from July 2015 to July 2018.  According to the instruction issued on the basis of this act, the  company is required to reduce emissions by 90% until December 25 of  the current year. The company today declares the practical  impossibility of fulfilling the requirements prescribed by the  environmental inspectorate.

Taking into account the existing realities in the field of the mining  industry, the Vallex Group once again emphasizes that in order to  organize an environmentally safe copper production, it is necessary  to build a new plant, in the direction of which negotiations were  held with the Chinese company Citic Group. A new plant construction  program is under development. Construction of the plant, as noted in  "Vallex", it would be advisable to carry out on the territory of the  existing plant "Alaverdi", where there is the necessary  infrastructure and platform. "At the moment, we can report that,  according to the results of various meetings and long negotiations  with the Chinese side, there is a positive trend in the  implementation of the program for the construction of a new copper  smelter," said , stressing that for the implementation of  this "difficult" project government assistance is needed, for which  an ad hoc working group was created in the government.

At the same time, it is reported that in order to build a mining  complex in Teghut, VTB Bank, in exchange for the loans provided,  demanded that the assets and shares of ACP be laid down along with  other guarantees. However, the legal processes related to the  realization of Bach's pledge rights to property have not yet been  implemented.

"We inform that the goal of all negotiations with the government is  to find a solution that is beneficial for all parties, first of all,  for our citizens. With all the problems associated with the operation  of the enterprise, the company made the more difficult decision - to  suspend the activities of the copper smelter and, according to the  labor code order, terminate employment contracts with employees of  the enterprise, "- said in a statement the group of companies"  Valleks ".

Note that Vallex Group (Vallex Group) was established in 1998 and  unites 20 subsidiary and affiliated companies. Among them, Teghut  CJSC, founded in May 2006, 100% of the shares of CJSC belong to  Teghut Investments Limited of Cyprus, 100% of which voting shares in  turn belong to Armenian Kopr Program CJSC, which is fully owned by  Valery Mejlumyan, and also CJSC "Base Metals", operating the  copper-gold deposit in the village of Drmbon, Martakert region, NKR,  Armenian Copper Program CJSC (ACP), operating the Alaverdi Copper  Smelter.