Starting from March 2019, a pilot program of agricultural risks  insurance will be launched in 5 regions of Armenia 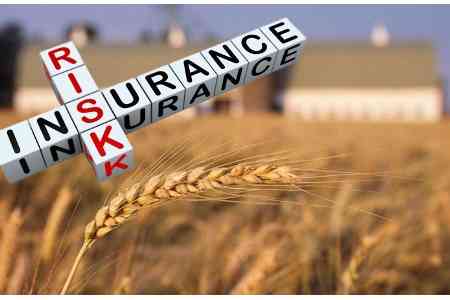 ArmInfo.From March 2019, a pilot program of agricultural risks insurance will be launched in 5 regions of Armenia. Answering the question of ArmInfo, Armenian Deputy Minister of Agriculture Gegham Gevorgyan said this on January 31 after a  government meeting.

According to Gevorgyan, despite the fact that earlier it was  announced that only two regions were included in the pilot program -  Ararat and Armavir - it was decided to expand the list of  beneficiaries to five. As a result, the Vayots Dzor, Tavush and  Aragatsotn regions were added. About half a billion drams will be  allocated for financing the program. At the initial stage, the  insurance will concern fruit and vegetables - apricots and grapes.  Insured risks will be hail and frost.

According to the deputy minister, several insurance companies have  already expressed interest in participating in the program. However,  he abstained from naming them, noting that he would do it after  documents of cooperation  are signed with them.

As ArmInfo informed earlier, a  pilot program on agro-insurance is  planned to be implemented in the Ararat and Armavir regions of  Armenia, which will cost the state  treasury 360 million drams. The  possibility of testing the program in  the Shirak region of the  republic is also discussed. "Nothing like  this has been done before  - the system provides for 100% compensation  for farmers' losses,"  egham Gevorgyan said in the end of November 2018. "All farmers are  unequivocally in  favor of the introduction of the program,"  Gevorgyan said, stressing  that the program provides for subsidized  insurance contributions. The subsidies will make 60-65% of the cost  of the insurance policy, and  the farmer will have to pay 30-35  thousand drams per 1 hectare.

As the heads of the Ministry of Agriculture have repeatedly stated,  it is the agricultural risk insurance system that will become a new  solution to fully cover the losses of farmers. Today, losses of  agriculture from natural disasters in the amount of about 12 billion  drams (about $ 25 million) are compensated by the state, but in the  case of insurance, these compensations will be assigned to insurance  companies.

Agricultural insurance in the field of cattle breeding is not being  considered at the moment. By the end of December this year, work will  be completed on the development of all necessary documents, final  negotiations will be  held with the Central Bank, commercial banks  and insurance companies.  The National Agroinsurance Risk Management  Agency (NARMA)will finally be  established. (As Gevorgyan noted  today, the Agency was renamed but its functions remained the same).  The Agency will be the tool by which the consequences of  natural  disasters will be evaluated. An institute of damage  evaluators will  be set up, the main insurable risks will be selected.  NARMA will  also develop insurance products. As indicated by the  Acting  Minister, almost all insurance companies operating in Armenia  are  interested in participating in the program.

According to the Ministry of Agriculture, the German KfW bank will  allocate a grant of 5.3 million euros for the implementation of a   pilot program of the agricultural insurance system in Armenia. The   main grant amount of 4.8 million euros should be directed solely to   subsidize the purchase of insurance policies by farmers. The   remaining amount of 515 thousand euros will go to cover the costs   associated with consulting. At the same time, the RA Government,  represented by the Ministry of Agriculture, will come up with a   co-financing program in the amount of 5 million euros. Climate   Investment Fund will also provide 2 million euros, of which 200   thousand euros will be used to subsidize the purchase of insurance   policies, and 1.8 million euros - for consulting services. A   consortium consisting of three companies will handle consulting.   Together with these companies, the Ministry of Agriculture and the   Central Bank are preparing the first pilot project on agricultural   insurance in Armenia. 1.9 million euros will be allocated for the   establishment of NARMA, the retraining of personnel and the formation   of an institute of an appraiser, the development of by-laws and the   services of a consulting company.