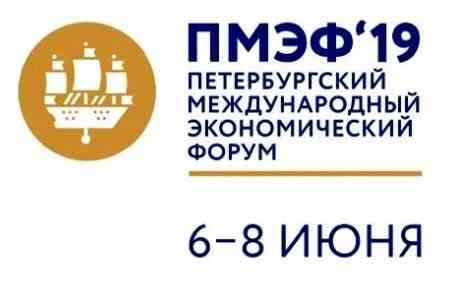 ArmInfo.A delegation of the Armenian government headed by Prime Minister Nikol Pashinyan will visit St. Petersburg on June 6-7, where he will take part in the work  of the St.  Petersburg International Economic Forum.

According to the decision of the head of government dated June 5,  posted on the website of the executive body of e-gov.am, during Nikol  Pashinyan's stay on a business trip, his duties will be entrusted to  the Deputy Prime Minister Tigran Avinyan.

Earlier, ArmInfo reported that the St. Petersburg International  Economic Forum in 2019 (SPIEF-2019) will be held June 6-8. The forum  has been held since 1997, and since 2006 it has been held under the  patronage and with the participation of the President of the Russian  Federation. The forum is a platform for communication between  business representatives and discussion of key economic issues facing  Russia, emerging markets and the world as a whole. Last year, the  forum was visited by 17 thousand guests from 143 countries.

As the presidential aide Yury Ushakov said yesterday, the president  of Bulgaria (Rumen) Radev, the prime minister of Armenia (Nikol)  Pashinyan and Slovakia (Peter) Pellegrini, as well as the UN  Secretary General (Antonio) Guterres will take part in the forum.  "All these leaders, whom I named,  will take part in the plenary  meeting on June 7," Ushakov told reporters. In particular, he noted  that in addition to these leaders, official representatives from  other states will come to the forum. "Moldova's President will also  arrive , he periodically participates in the forum. There will be the  president of South Ossetia (Anatoly) Bibilov, vice- presidents of a  number of countries, prime ministers, vice-premiers and deputy  governments from Belarus, Belgium, Iraq, Kazakhstan, Qatar,  Kyrgyzstan, Luxembourg, Mongolia, Serbia, Uzbekistan. And more than  40 foreign ministers and parliamentary speakers, " Ushakov said.