Nikol Pashinyan: Rationality is the only direction for increasing the  competitiveness of the country`s economy 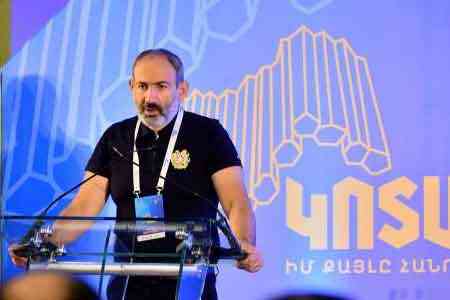 ArmInfo. Rationality is the only direction for increasing the competitiveness of the country's economy. On August 17 during the <My step for Kotayk region> business  forum  Prime Minister of Armenia Nikol Pashinyan stated.

<In total, one of the main tasks of our country is to ensure  rationality. Unfortunately, we very often lose this rationality,  starting with the management system and ending with other areas. Our  task is to ensure that every invested and spent dram brings the  greatest possible result in all areas without exception>, the RA  Prime Minister said. In particular, Pashinyan during his speech  emphasized the importance of holding such forums for presenting and  discussing ideas from the point of view of their development. <It is  very good that we continue to hold such forums and have already  reached the Kotayk region. I look forward to the speeches of  entrepreneurs of Kotayk region who will tell about their success  stories and present programs that will allow us to understand how the  government can promote and stimulate them to ensure efficiency>, the  prime minister said, noting that such forums will be held in all  regions of country.

Speaking about the possibilities of Kotayk, Pashinyan emphasized that  the region has a high industrial potential. <The Armenian government  is in constant communication with industrialists. And our task is to  provide the necessary conditions to increase the competitiveness of  our manufacturers. This is a very important and delicate work, which  we intend to provide in the near future>, he noted.  Continuing, the  Prime Minister emphasized that the government should be confident  that the policy was chosen to develop industrial potential will be  aimed at strengthening institutional capacities. <Figuratively  "planting" industrialists simply for assistance, we reduce their  competitiveness, productivity, and in reality limit the possibilities  of their institutional development, "he stressed.  At the same time,  the prime minister pointed out the high tourist potential of the  Kotayk region, emphasizing Tsaghkadzor in this vein as one of the  important tourist destinations.  Pashinyan also pointed to the  presence of companies engaged in high-tech activities in the Kotayk  region.  He said that, the government is pursuing an appropriate  policy for development  of IT sector Among the priority areas of the  Kotayk region, the head of the RA government also noted industrial  agriculture, in particular, noting the high potential of this  industry in Kotayk. He emphasized that the efficiency in the  industrial agricultural sector should seriously increase. "This is a  strategic task for us," he concluded.  To note, the  <My step  forKotayk region> business forum is held with the aim of presenting  the investment potential of the region and stimulating investment in  the priority areas of the region, establishing new business ties  through discussions, round tables, etc.  To recall, similar forums  have already taken place in Ararat, Lori, Gegharkunik, Syunik,  Tavush, Shirak regions.