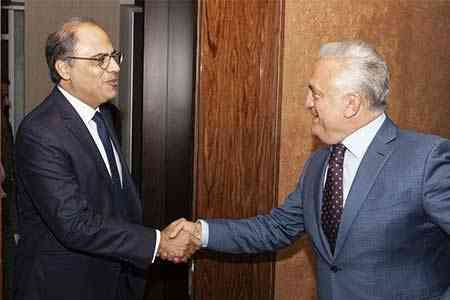 ArmInfo. Chairman of the Central Bank of Armenia Artur Javadyan met with a delegation of the International Monetary Fund (IMF), led by IMF Director for the Middle East and Central Asia Department Jihad Azour. According to the CBA  official statement, during the meeting A. Javadyan noted that the  cooperation between the IMF and the RA has always been effective and  important.

"The IMF's comprehensive financial and technical support  programs have had a significant impact on ensuring macroeconomic  stability in Armenia and gaining confidence in current economic  policies," he said.

At the same time, the CBA Chairman praised the role of the IMF in the  objective presentation of the macroeconomic development of Armenia to  foreign investors and partners.

The Central Bank Chairman also recalled the approval by the IMF  Council in May 2019 of "stand-by" loans for a period of 36 months,  which is one of the anchor indicators of macroeconomic stability and  the continuity of systemic reforms in the country.

In addition, the head of the Central Bank drew attention to the IMF's  efforts in the process of a complete revision of the Financial Sector  Assessment Program (FSAP) of Armenia, emphasizing that the analysis  of financial sector development priorities reflected in the report  play a significant role in maintaining financial stability in Armenia  and are included in the CBA work agenda . According to the source, A. Javadyan presented to the guests the  situation regarding economic growth, monetary policy, financial  stability, reforms initiated by the government, and answered  questions of interest.