Pashinyan: Armenian authorities attach importance to the inclusion of  leading airlines in the Armenian aviation market 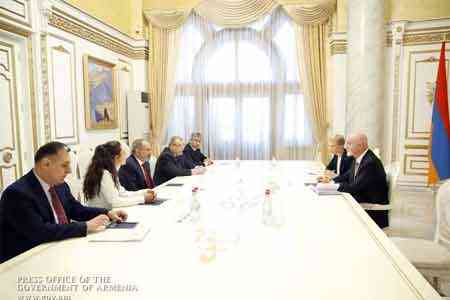 According to the Prime Minister's press service, the Armenian  Government has declared tourism as a priority and the sector has  great potential for development and in this context the development  of civil aviation is one of the important steps.

Pashinyan said that the Armenian Government attaches importance to  the inclusion of leading airlines in the Armenian aviation market and  noted that the meeting is a good chance to discuss possibilities for  cooperation.

The Chief Commercial Officer of Ryanair, in turn, noted the company  is planning to enter the Armenian aviation market soonand that  discussions are currently underway with the Civil Aviation Committee  and Yerevan’s Zvartnots Airport. David O'Brien presented a vision of  the airline's activities in Armenia, talking about new possible  directions from Armenia, tariff policy, etc.

Earlier, head of the Civil Aviation Committee, Tatevik Revazyan,  during a press conference, announced the possible entry of new  low-cost carriers to the Armenian aviation market. In this regard, as  she said, the Committee prepared a legislative initiative to abolish  the so-called "air charges" for new carriers. This, as Revazyan  pointed out, is necessary to attract more airlines to Armenia,  especially the so-called "low-cost airlines" due to the fact that the  air-duty introduced in the country many years ago is included in the  price of air tickets and raises the general price level for passenger  air transportation.