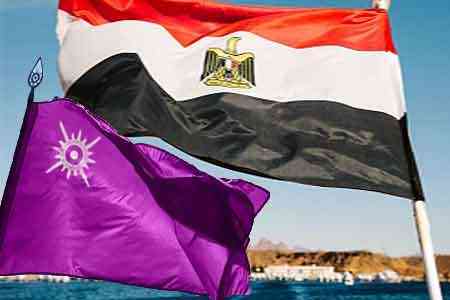 As reported by ArmInfo in the press service of the RA MFA, during the  conversation a wide range of issues on the bilateral agenda was  raised. Ministers emphasized the importance of enhancing political  dialogue and the role of periodic consultations between foreign  affairs agencies in the development of bilateral relations.

The interlocutors noted with satisfaction the existence of effective  cooperation between Armenia and Egypt both in bilateral and  multilateral platforms.

Mnatsakanyan confirms Armenia's assistance to Egypt in negotiations  on an agreement on a free trade zone with the Eurasian Economic  union.

The first round of negotiations on a free trade agreement between the  EAEU and Egypt took place in January 2019. The agreement will provide  new opportunities for the development and simplification of trade  between participants, the Eurasian Economic Commission (EEC) noted.

According to Russian Foreign Minister Sergei Lavrov, the EAEU has  received more than 50 proposals from various countries and  international organizations on the establishment or expansion of  trade and economic relations. The EAEU has the most intensive  dialogue with India, Egypt, Serbia, Singapore, Israel, MERCOSUR and  Argentina.

In June of this year, the head of the Ministry of Industry and Trade  of the Russian Federation Denis Manturov stated that an agreement on  a free trade zone between Egypt and the Eurasian Economic Union  (EAEU) could be signed next year.