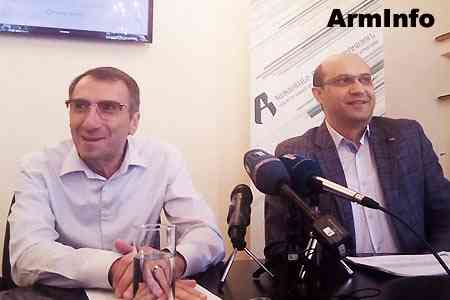 ArmInfo.The Union of Banks of Armenia (UBA) announced a series of activities to increase the financial literacy of the population, the main target group of which  will be students and high school students. This was announced on  August 23 during a press conference with the participation of the  Chairman of the UBA Artak Anesyan and Executive Director Seyran  Sargsyan.

According to A. Anesyan, the need to increase financial  literacy arises, in particular, because the banking system of  Armenia, which is developing dynamically, is actively introducing new  tools, products and services that are not clear to ordinary people.

In turn, Seyran Sargsyan said that for students the events will start  from the beginning of the new school year. In particular, he  explained that for students the senior staff of Armenian banks will  hold lectures on financial topics. "While the weather conditions are  favorable, we plan to conduct lectures and thematic discussions for  students in the open air, after which we will move on to student  audiences," he said.  High school students were selected as the next  target group, which will be divided into groups in Yerevan and some  regions. "Students will visit the head offices of banks in Yerevan  and branches in regions where they will get acquainted with  organization of work in the banks, with the features of their  activities. At the same time, thematic discussions will be held",  said S. Sargsyan. In addition to these lectures, he said, it is  planned to hold games and competitions on financial topics, in  particular, writing an essay on a number of financial topics and  creating videos. A specially established commission will select the  best works whose authors will be awarded. He noted that for students  studying economic and financial specialties, it is planned to hold a  competition for the preparation of business plans. For the youngest,  according to S.  Sargsyan, stage performances will be organized.

In addition, in the fall, a series of videos are expected that will  reveal the most worrying topics of a financial nature to the public.

"And we want to end the year with an important event. This is a  competition for economic journalists.  Within a year, the commission,  after monitoring on all media sites, including TV, radio, print and  electronic publications, will select the best analytical materials  and award their authors, "he concluded.