Karine Minasyan: EAEU single market without barriers can only be  formed through self-discipline based on digital transparency 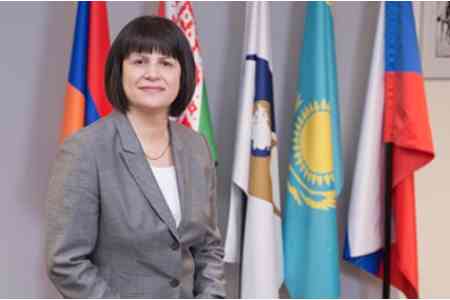 ArmInfo.  The issues of uniting the markets of  the member states of the Eurasian Economic Union (EAEU) will be  discussed on September 26 at the IV International Exhibition Forum  "Eurasian Week - 2019", which will be held in the capital of the  Kyrgyz Republic, Bishkek. Member of the board (Minister) on internal  markets, informatization, information and communication technologies  of the Eurasian Economic Commission (EEC) Karine Minasyan will  participate in the Forum as a member of the panel discussion "The  EAEU Internal Market - Myths and Reality>.

The movement of goods, workers, services and capital in the EAEU  should be unhindered. However, in many cases, the member states of  the Union apply restrictive measures at internal borders, which  contradicts the basic principles of the EAEU Treaty.

Representatives and experts of the EEC and state authorities  responsible for economic integration, as well as business  communities, during the session will analyze the obstacles in the  EAEU domestic market and evaluate the current possibilities of the  EEC to address them. Participants will also discuss the impact of  digitalization on the free movement of goods, services, capital and  the workforce of the Union.

Among the topics to be discussed are the extent to which the movement  of goods and labor is "free" from state control. They will consider  issues of mutual trust between the relevant departments of the Union  countries while ensuring the functioning of the domestic market, the  impact of digitalization on ensuring four "freedoms" in the domestic  market, its capabilities and risks.

The session will be organized by the block on internal markets,  informatization, information and communication technologies of the  EEC.  "I am convinced that the Union's single market for goods,  services, capital and labor without barriers, exceptions and  restrictions can only be formed through the digital transformation of  business and state control based on digital transparency," Karine  Minasyan says. - The speed of such changes will determine the  competitiveness of the Eurasian Union for many years. We need to  figure out how to solve this problem with the help of .