SCR and GeoProMining Gold signed a cooperation agreement for 2020 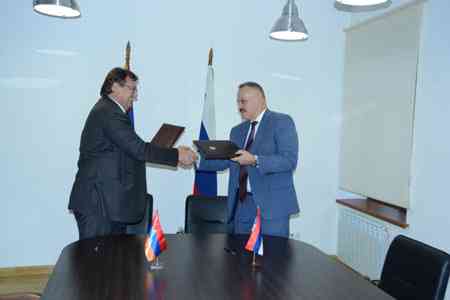 According to the SCR press service, the agreement provides for a possible increase in 2020 of the volume of ore transported along the Zod-Ararat route with a length of 269  kilometers to the level of 2019. This year, the entire volume of ore  transportation from Zoda to Ararat is carried out by rail, and by the  end of the year it is planned to transport 1.5 million tons of ore,  which is 15% more than in 2018. Since 2008, as a result of  significant investments by the two companies, the actual growth in  transportation and processing of ore was three times.

GeoProMining Gold company upgraded the Ararat factory, introducing  the Albion innovative technology for processing refractory ores in  2014, and also installed a car dumper for transshipment of ore from  the railway, which helped stabilize the supply of ore to the factory.  GPM Gold's investment in these projects amounted to $ 160 million.

On the part of SCR, it has been restored that has not been working  since the beginning of the 90s. electric centralization station at  the Zod station, overhaul of the loading route of the station was  carried out, a semi- automatic blocking system based on  microprocessor technologies was restored on the Shorzha-Zod section,  which ensured non-stop movement throughout the entire section of the  Zod-Ararat route and reduced the time of ore delivery to the  consumer. The state of the contact network has been significantly  improved, overhaul of tracks using reinforced concrete sleepers has  been carried out, which has increased the weight and speed of trains.  In general, since 2008 more than 2 billion drams have been invested  in the indicated works in the Sevan-Zod section.

According to Sergey Valko, GeoProMining Gold is the largest partner  of the railway, and the share of goods transported for it reaches 55%  of SCR freight. <The company's investments in the modernization and  maintenance of track facilities in this direction are in the focus of  SCR management. Since 2018, the company has also begun the planned  renewal of rolling stock. In 2018, 40 new gondola cars were  purchased, another 40 new gondola cars are planned to be purchased  before the end of this year>, the head of the railway said.

In turn, the president of the GeoProMining Group of Companies, Roman  Khudoly, expressed satisfaction with the cooperation with SCR. <The  situation of 2008-2009 was still remembered, when the railway hardly  provided even small transportation compared to today's volumes from  Sotka to Ararat due to constantly arising technical problems. At  present, our partner is successfully ensuring annual growth in  traffic from the field to the factory in Ararat, which allows us to  implement our investment and production plans without interference,  "said Roman Khudoly.