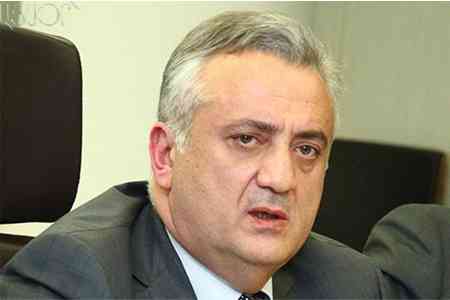 ArmInfo. President of the  Central Bank of Armenia Artur Javadyan left for Prague to participate  in the 42nd session of the Central Bank Governors' Club of the  Central Asia, Black Sea Region and Balkan Countries. ArmInfo was  informed about this in the press service of the CBA.

According to the source, an international scientific conference will  also be held as part of the event, during which issues related to  inflation targeting in developed and developing countries,  statistical data management in the context of monetary policy will be  discussed.

During the visit, A. Javadyan's meetings with the heads of a number  of central banks and the heads of financial institutions are also  planned.  It should be noted that the Central Bank Governors' Club of  the Central Asia, Black Sea Region and Balkan Countries was founded  in 1998. Club members are central banks of 25 countries: Albania,  Belarus, Bulgaria, Bosnia and Herzegovina, Russia, Armenia, Georgia,  Azerbaijan, Kazakhstan, Tajikistan, Kyrgyzstan, Moldova, Ukraine,  Greece, Israel, China, Macedonia, Poland, Romania, Serbia, Slovenia,  Turkey, Croatia, Czech Republic and Montenegro.