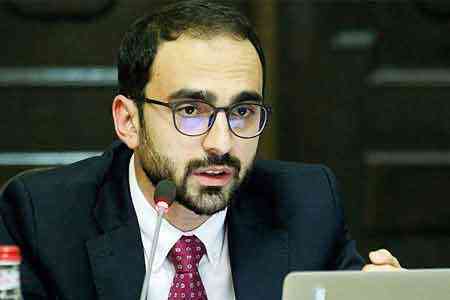 ArmInfo. The Armenian  government is thinking of expanding the capabilities of inspection  bodies so that they can not only check and record the consequences,  but also prevent such incidents. This was stated by Deputy Prime  Minister of the Government of Armenia Tigran Avinyan in a  conversation with reporters on November 20, commenting on the fact of  another pollution of the Voghji River.

To recall, on November 18, the Armenian Environmental Front reported  that the Voghji River was once again polluted near Kapan, presenting  video footage shot by one of the citizens. On October 17, the 911  service received information that the Voghji river of the Syunik  region was polluted (the water in the river turned white). The  operational group of the regional center for crisis management of the  Ministry of Emergencies, which arrived at the site, found out that  the pipeline of Zangezur Copper-Molybdenum Plant CJSC was damaged  near the village of Nerkin Giratagh, Syunik Region. Waste poured into  the Voghji River. The staff of the regional structure of the  Inspectorate for the Protection of Nature and Subsurface Resources  took water samples from the river. On November 19, the Syunik  Territorial Department of the Inspectorate for Conservation of Nature  and Subsurface Resources of the Republic of Armenia and the employees  of the Syunik Regional Police Department reported on pollution of the  Voghji River and conducted a joint inspection and research, and took  water samples.

"We all understand that these are inherited problems that sooner or  later would arise. I think that by working calmly and methodically we  will achieve the goal that we will call the" responsible mining  industry "and also understand how to repair the damage done for  decades, "said Tigran Avinyan.

Earlier, on October 17, it became known that the waste from the  Zangezur Copper-Molybdenum Combine had been discharged into the  Voghji River, which caused the river to turn brown. Before the  rescuers arrived at the scene, the damaged area of the waste storage  was repaired. As Minister of the Naure Protection, Erik Grigoryan,  stated then, the pipes at the plant have not changed since Soviet  times.  According to him, the amount of damage to the environment  will soon be determined, on the basis of which the amount of  compensation will also be determined. At the same time, as the  Minister admitted, the current regulation on restoration of  environmental damage needs to be substantially revised. So, the  legislator has set such ridiculous tariffs for damages that it is  often more profitable for the owner of the mine to pay a fine than to  modernize the infrastructure, in particular, to change the pipes. On  October 31, the Prosecutor General's Office opened a criminal case on  the damage to the pipeline and the pollution of the Voghji river by  the waste of the Zangezur Copper-Molybdenum Combine on the grounds of  clause 1, part 2 of Article 284 of the RA Criminal Code (Violation of  safety rules when handling hazardous chemical or biological  substances and waste). As the press service of the Prosecutor  General's Office reports, facts of flagrant violation of safety rules  during the transportation of waste by ZCMC employees were revealed.  As a result of this, one of the pipelines was damaged, the waste went  into the Voghji River, which caused environmental pollution.