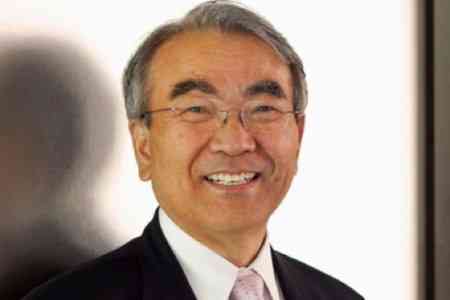 ArmInfo.  The winner of the State  Prize of Armenia Global IT Award -2019 was a Japanese computer  scientist and one of the world's leading computer vision researchers  Takeo Kanade. This was announced at a November 20 press conference at  the RA Ministry of High Technology Industry.

It should be noted that the prize was established on July 6, 2009 by  the decree of the President of the Republic of Armenia and is awarded  annually to persons with an exceptional contribution in the IT field.   Minister of High-Tech Industry Hakob Arshakyan stated that laureates  become ambassadors of Armenia all over the world, forming an image of  Armenia as a technological country, and through its partners  disseminate information about the potential of the state.

Attaching importance to constant interaction with former laureates,  Arshakyan cited an example of successful cooperation with National  Instruments Corporation, noting that co-founder of the company James  Truchard became the winner of the award last year. In this regard,  the minister recalled that the Smart City project with a budget of $  20 million is being implemented today in conjunction with the above  corporation.

Speaking about the grant support program in the field of IT,  Arshakyan stated that 2 billion drams will be allocated for the  implementation of the two programs in 2020. , he explained.  In turn, VivaCell-MTS General Manager Ralph Yirikian stated that the  Global IT Award is a kind of Armenian passport in the world, and  called the great achievement that outstanding scientists share their  experience with Armenian specialists and students.

It should be noted that the current laureate will arrive in Armenia  on December 3 to receive the state prize from the hands of the Prime  Minister of the Republic of Armenia Nikol Pashinyan.

Within the framework of the visit, Takeo Kanade is planning his  meetings with the President of Armenia Armen Sarkissian and the  Catholicos of All Armenians Karekin II. A meeting with students and  specialists of Synopsys Armenia is also planned. This year the prize  is awarded for the 10th time and consists of a gold medal symbolizing  high technology, as well as a symbolic souvenir. The prize was  awarded by the steering committee, and the selection of the winner by  the international commission.