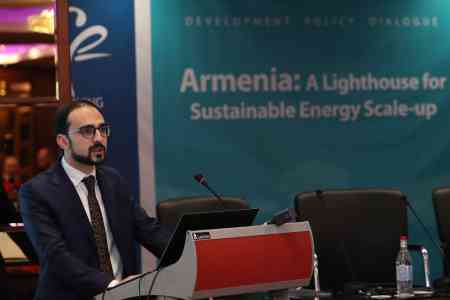 The Deputy Prime Minister noted that certain goals and actions are in  tune with the priorities of economic development, in particular in  terms of modernizing tourism infrastructures and expanding the  capacities of territorial development. He noted the importance of  effective implementation of the program and noted the commitment of  the government to develop opportunities in this direction.

The interlocutors also discussed issues related to the restructuring  of the program.

It should be noted that the World Bank-funded Local Economy and  Infrastructure Development Program was launched in December 2015 and  will be completed in April 2021. The total cost of the program is $  68.7 million. The program provides for the improvement of urban and  rural communities, historical and cultural localities, the  establishment of tourist service centers, tourist route roads,  accessibility, technical assistance. The program will play a special  role in building regional tourism potential.

Armenia has been a member of the World Bank since 1992. In total, the  WB provided Armenia with funds in the form of loans and grants of  about $ 2.3 billion. As a rule, one third of these funds is spent on  reimbursing the budget deficit and another third on financing  infrastructure projects. On March 28, 2019, the Board of Directors of  the World Bank (WB) approved a new credit line for Armenia for $ 500  million to ensure sustainable and inclusive growth and improve the  welfare of the country's population within the framework of the  Country Partnership Framework (CPF) program at 2019-2023. In order to  overcome poverty and promote global prosperity, the World Bank  through CPF intends to assist Armenia in three areas: stimulating  export and enterprise competitiveness, developing human capital and  equality, and sustainable management of the environment and natural  resources.