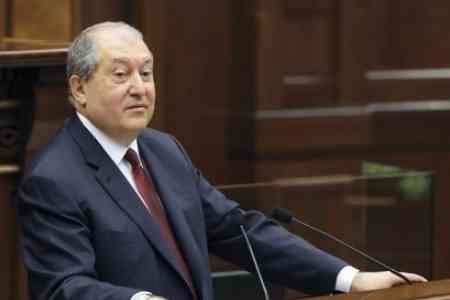 ArmInfo. We are opening a new page in the Armenia-Qatar relations, which has the support of the Qatari leadership. This, summing up the visit to Qatar, the Armenian  President Armen Sarkissian said in an interview with the Armenian  media.

Recalling that, following the visit, an agreement was signed on  establishing a visa-free regime with Qatar, the President expressed  confidence that tourism between Armenia and Qatar would develop  intensively and create new business opportunities and conditions for  both Armenian and Qatari entrepreneurs.

Touching upon a meeting with Sheikha Moza, Bint Nasser al-Misned, who  is the head of the Qatar Foundation and has played a significant role  in a number of national and international projects, Sarkissian noted  that the results of her work are admirable, since Sheikha Moza  created the Qatar Foundation, which has become a huge international  educational platform.  <According to the results of our meetings, new  doors opened for Armenia. I hope that our statesmen, educational and  research institutions, as well as individuals who have a desire to  get an education here, can come to Qatar, get a good education here,  then return to their homeland>, Sarkissian said.  Touching upon the  prospects of business cooperation, the President named several areas,  in particular, noting that in Qatar, they are primarily interested in  modern technologies.  "Everyone here realizes that without artificial  intelligence tomorrow it will be impossible to use spacecraft,  control the most modern technologies, to the extent that without  artificial intelligence the development of education and research  will also be unthinkable," he said.  Sarkissian also said that he  invited the head of Qatar to pay an official visit to Armenia, in  particular Qatari colleagues and Sheikha Moza to take part in several  international conferences to be held in Armenia, including the   "Armenian Summit of Minds" and the International Festival of Science  and Art STARMUS.

<They are interested in a visit, as they attach great importance to  new technologies. The leadership of Qatar provides huge sums for the  development of this sector. We do not have this industry yet, but  there are talented programmers who can become the basis of this  industry. However, we have to work hard in order to support this  area, since any area needs support in order to rise to the world  level>, the President said.

To provide better ideas and a source of funding, Sarkissian called  the creation of the necessary conditions for this, in particular  talented people, good universities, a good educational system,  possibly financial, tax support. <Another interesting topic is food  safety, which is important for Qatar, the Persian Gulf countries, and  Armenia. Food safety is not the safety of its quality, but uniform  distribution, continuous, stable production and import. In the case  of Armenia, it is also correct that it becomes the third market,  supplying not only its own goods, but also products of foreign  origin.

And thirdly, Qatar, being one of the richest countries in the world,  has various mechanisms and funds that invest in different countries  and various spheres, from mining metallurgy, mining and ending with  agriculture. Armenia can attract financial investments", he  concluded.