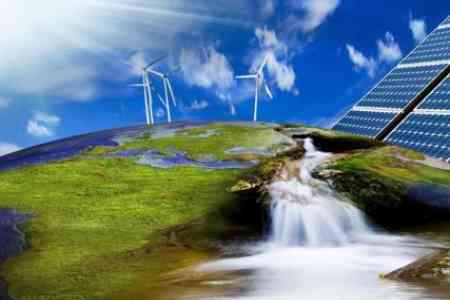 ArmInfo. Solar energy is an essential component of environmental protection. Deputy Prime Minister Tigran Avinyan stated on December 4, in response to a  request from the Bright Armenia faction MP Mane Tandilyan about the  lack of funds in the country's budget for the construction of solar  energy facilities.

According to him, the lack of appropriate resources in the country's  budget does not mean a rejection of the development of this type of  generation. On the contrary the development of solar energy will  reduce volumes of electricity production by heat generation  facilities. In the end of  last year licenses for the construction of  solar stations with total installed capacity of 200 MW were issued.  Next year a tender wll be announced for the construction of solar  energy facilities for another 120 MW. The government has received a  program for the construction of 400 MW solar stations. "And against  this background, you say that the government does not pay due  attention to environmental protection?", Avinyan wondered.

It should be noted that two days ago in Abu Dhabi, the signing  ceremony of the agreement was held, according to which the Masdar  company will attract $ 300 million to build 400 MW solar power plants  in Armenia. Director of the Armenian National Interests Fund David  Papazyan noted that it is planned to build power plants based on  renewable energy sources with a total installed capacity equal to the  Armenian Nuclear Power Plant. The matter concerns the construction of  a photovoltaic station with a capacity of 200 MW, a wind turbine of  200 MW and "floating" solar installations with a capacity of 100 MW.  As Papazyan noted then, more than 200 rivers and lakes can be used  for floating solar programs. In Armenia, where the wind speed is 8.5  meters per second, there are favorable conditions for construction of  a wind farm. The country records an indicator of 1,720 kWh of solar  energy per 1 sq. meter, in contrast to the European average of 1000  kWh. Armenia, since 2010 a full member of the International Renewable  Energy Agency Abu Dhabi, aims to provide more than a quarter (26%) of  domestic demand through renewable energy by 2025.  It should be  reminded that construction of the Masrik-1 industrial-scale solar  power plant is ongoing in Armenia, which is being built by the  winning consortium from a Dutch company with Spanish roots Photowatio  Renewable Ventures B.V and Spanish FSL Solar S.L. In order to  implement the project, the consortium founded the Efarvi Masrik  company in Armenia. Estimated cost of the investment program will  exceed $ 55 million.

It should be noted, however, that Armenia has inexhaustible resources  of solar energy, the problem is in accumulation stations, the absence  of which can negate all the efforts of the government. In an  interview with ArmInfo's correspondent Deputy Minister of Territorial  Administration and Infrastructures of RA Hakob Vardanyan noted that  if there are orders for the construction of renewable energy sources  of 400 MW, it will be necessary to build an accumulation station.