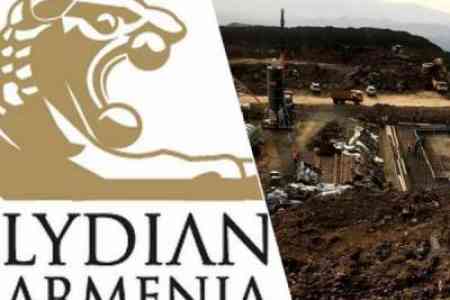 ArmInfo. Lydian Armenia has paid over 930 000 USD to local communities in land rent payments, the statement of the company received by ArmInfo reads.

"Lydian's access to its Amulsar project has been illegally blocked  since June 2018.  Despite the court rulings on the need for the  relevant authorities to restore Lydian's access, the roads remained  blocked. Nevertheless, Lydian continued to fulfill its contractual  obligations and paid land rents to the community budgets. As part of  its commitment to transparency, at the end of each year the Company  discloses the payments made to the communities.  In 2019, land rent  money paid to all communities sums to $930,797, of which:   Jermuk/Gndevaz-$408,228, Zaritap/Saravan- $268,726 Gorayk - $253,844.   Total land rent payments the Company has paid to the communities for  the period of 2008-2019 was over $6 million dollars.

As provided by Armenian legislation, the Company has no right or  leverage over how the money paid by the Company is used by local  communities and administration.  However, local population has that  right - to demand transparency and accountability on the use of land  rent money.  In the past, some communities invested land rent  resources in rural infrastructure improvement. Gorayk, for one, fully  upgraded the drinking water and sewage systems.  Lydian Armenia has  not been provided with information on the use of over USD 6 million  dollars paid to the municipal budgets in the past several years.

The company also informs that out-migration increases.  A notable   increase of both temporary and permanent migration is reported in  all communities since the blockades started: 2.6 times increase for  both categories in 2019 compared to 2017 (390 vs 148; 90 vs 34  respectively).  A total of 390 people out- migrated for temporary job  opportunities and 90 out-migrated permanently in 2019.  This data is  collected from the respective communities: Employment Center in  Jermuk and local government and community representatives in other  communities.  It should be noted that migration figures fluctuate  over time as people come and go.  The numbers below are based on the  best knowledge of community representatives for the given time period  and can change in future. However, lack of employment and business  opportunities and increase of migration as a result is quite visible  from the available data thus far.

It should be noted that Lydian Armenia is a subsidiary of the British  Lydian International. The life of the deposit will be 10 years and 4  months, while an average of 200 thousand ounces of gold is planned to  be mined annually. Amulsar field is the second largest reserve in  Armenia. According to the company, the deposit contains about 73733  kg of gold with an average grade of 0.78 g per ton, as well as  294.367 tons of silver with an average grade 9.29 g per ton.

The development of the field will increase the country's GDP by 1% -  4%, 1% of which will be a direct impact. Finished products, which  will be almost completely exported, will be about $ 250 million. As a  result, the impact on export growth is estimated at about 10%.