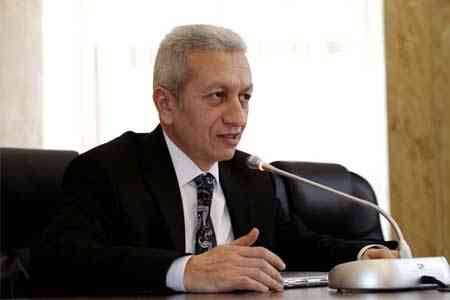 ArmInfo.By the end of 2019, Armenia will not "meet" the deficit figure set in the budget for 2019. The Ministry of Finance is inclined to the fact that according  to the situation as of December 31 this year the indicator will be  about 4-fold lower than the figure laid down in the Law "On the State  Budget of the Republic of Armenia for 2019".

"At present, we can't give a final figure for the deficit for 2019,  since it substantially depends on the feasibility of programs  implemented on external borrowing. But we predict that the figure  will be in the range of 0.6-0.8% of GDP,"  Armenian Finance Minister  Atom Janjughazyan told ArmInfo correspondent.  According to the chief  financier, the state budget deficit this year will be even lower than  the indicator recorded in the "On the State Budget of the Republic of  Armenia for 2020", as revised - at the level of 42.5 billion drams  (1.6% / GDP).

It should be noted that, according to the Law "On the State Budget of  the Republic of Armenia for 2020", the deficit by the end of this  year due to government policies aimed at increasing the efficiency of  government spending was revised downward. As a result, it is  forecasted to be much lower than the fixed figure of 151.6 billion  drams (2.2% of GDP) and will be about 42.5 billion drams (1.6% /  GDP).

In particular, capital expenditures, according to the adjusted annual  plan, should have amounted to about 250bln drams by the end of 2019  (instead of 220bln drams previously budgeted). Meanwhile, over 9  months the indicator reached the level of 71.1 billion drams, instead  of the required 184 billion drams.  Thus, capital expenditures for  the reporting period were unfulfilled by 112.4 billion or 61.1%.   Underfulfillment in the line of current expenses was also recorded:  in January-October 2019, 110.3 billion drams or 10.1% were  underfulfilled.  To recall, according to the results of 2018, in the  context of a restraining fiscal policy, the budget deficit decreased  and instead of the pledged 156.9 billion drams or 2.7% of GDP by the  end of December it amounted to 105.4 billion drams or 1.8% of GDP. To  finance it, the republic attracted 45.7 billion drams less borrowed  funds (new borrowings minus repayments of the principal amount of the  debt) than it had planned (179 billion drams). In particular,  external borrowings on this line amounted to 85.3 billion ($ 178  million), and 48 billion drams were raised from domestic resources.   According to the law "On the state budget for 2020", the budget  deficit will be 160.7 billion drams or 2.3% of GDP. The deficit will  be financed in the amount of 211.2 billion drams from domestic  sources and another 50.5 billion drams are expected to be attracted  from external sources. 12-month inflation is projected at around 4%  (+ / _ 1.5%).