Expert: Russia`s gas problems in Europe are limited to Poland and  Ukraine 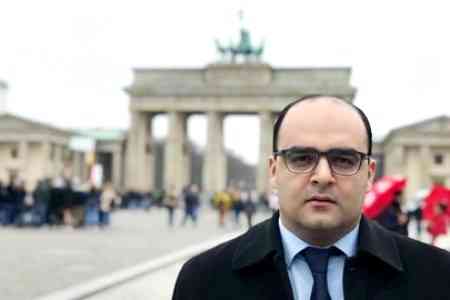 ArmInfo. Poland's decision to refuse from Russian gas in favor of the United States and Europe by 2022 has exclusively geopolitical motivation.

Director of the Institute for Energy Security Vahe Davtyan expressed  a similar opinion to ArmInfo.  "The basis of this decision is an  active energy policy initiated by US President Donald Trump from his  very arrival at the White House Oval Office. Trump openly announced  the "golden age of American energy dominance".

Today, Washington's active policy continues with priority for Eastern  European countries, which are mainly under American influence, "he  said.  In this light, the expert considers remarkable the already  voiced US intentions to supply Poland with gas at a price half that  of Russia. Moreover, regardless of what this price will be. Thus, the  US policy to oust Russia from the Polish gas market by artificially  reducing the cost of gas, in his opinion, has already been crowned  with success.

However, according to Davtyan's estimates, this policy pursues more  long-term and broader goals. In particular, one of the main goals of  the US Eastern European energy strategy is the formation of an energy  hub in Poland with the aim of exporting gas to Ukraine. Especially  given the negotiations already underway with Kiev on this issue.  At  the same time, the expert considers it necessary to take into account  all the recent quite serious transformations in the European energy  market.  In his opinion, it was precisely the sharp drop in gas  prices at the end of 2019 and the beginning of 2020 that allowed  Russian gas not only to remain, but also to gain a foothold in  Europe. Earlier this month, the price of gas in European gas  transportation hubs reached less than $ 50 per thousand cubic meters,  which, according to his estimates, is an unprecedented drop.  The  strengthening of Russia in the European market, according to the  expert, is facilitated by the rather cheap cost of Russian gas - $  20-22 against $ 70-75 of the cost of gas production in the United  States. This, in his opinion, explains the assistance of some  European countries, including Germany and Austria, to the  implementation of the Nord Stream-2 project by Russia. The project  aims to increase the export of Russian gas to Europe and should be  put into final operation by the beginning of 2021.

"Thus, the gas problems of Russia in Europe are limited to Poland and  Ukraine. This is supported by the sharp increase in demand for blue  fuel in Europe predicted by 2050. The reason is the continent's  gradual abandonment of coal and nuclear energy. While so far,  renewable energy is incapable to fully cover the difference. It is  European gas prospects that prompt Russia to implement such a  large-scale infrastructure project as Nord Stream -2, "the expert  concluded.