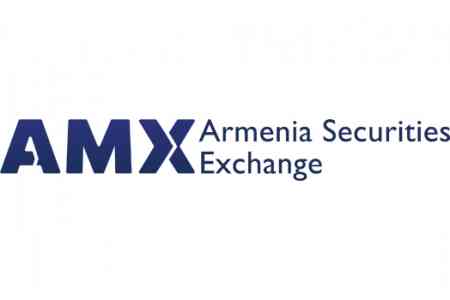 ArmInfo. On July 14, the unprecedented auction on the placement of the maximum volume of government bonds took place at the AMX Armenian Stock Exchange.

As ArmInfo was told in the press service of AMX, these were long-term government bonds of the issue AMGB1029A292, on which the largest  volume of 60 billion drams was placed today. The weighted average  yield was 7.92%, the cutoff yield was 8.08%, and the annual coupon  yield was 9%.

According to the source, the maturity of these bonds is set at 10  years, and the periodicity of coupon payments is every six months.

The entire volume of these government bonds put up for auction today  was fully satisfied. Moreover, the demand for them amounted to 159  billion drams, exceeding the offer 2.7-fold. This phenomenon confirms  the stability of the financial market and confidence in government  bonds.

The placement of these government bonds took place according to the  new electronic trading system, launched at AMX in January 2020, which  will become the basis for ensuring the accessibility to the secondary  securities market and direct access to the market (DMA - Direct  Market Access).

Retail investors can purchase these bonds through the online platform  gp.minfin.am, operated by the exchange. This platform allows  individuals to purchase government bonds online and without an  intermediary. According to the Ministry of Finance of the Republic of  Armenia, in 2019 over 535 million drams were traded through the  gp.minfin.am platform.