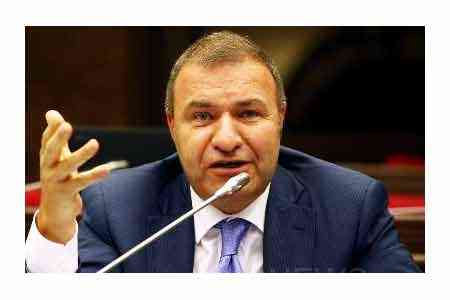 ArmInfo.The recession in the Armenian economy will continue. On September 18 from the rostrum of the National Assembly of the Republic of Armenia the MP from the  opposition "Prosperous Armenia" faction Mikael Melkumyan stated this.

According to him, back in April of this year, the government in its  forecasts indicated a decline in the country's GDP by only 2  percentage points. However, today it is already obvious that this  indicator will not be met. This, the MP noted, is evidenced by the  statement of the Central Bank of Armenia, which predicted a decline  in the country's GDP in 2020 to 6.2%. "We previously warned the  government about the unreality of the April forecast, and now we are  waiting for representatives of the executive body in the parliament  with a report both on the work performed and on the draft budget of  the country in 2021," Mikael Melkumyan said.

The MP also pointed to the expected 12% decline in tax revenues,  which is evidenced by the situation in the service sector,  construction and industry, and this, in turn, will lead to a change  in the budget deficit indicators. "How and by what means the  executive body will close the state budget deficit should also be the  subject of serious discussion," the deputy noted.

As for inflation, as Martin Galstyan noted, the Central Bank predicts  inflation at 2.5% by the end of 2020, which corresponds to the lower  threshold of the acceptable range for the baseline scenario.  Note  that according to the updated in early June this year. According to  the World Bank's forecast for 2020, a decline in GDP is expected in  Armenia by 2.8%. In its April forecast, the IMF expected a 1.5%  decline in Armenia's GDP in 2020 (there is no updated version yet),  but the IMF's deteriorated estimates of the global economy and  Russia's GDP decline in June would deepen the negative forecast for  Armenia's GDP.