Armenian Ministry of Finance predicts budget deficit of 7.4% of GDP  for 2020 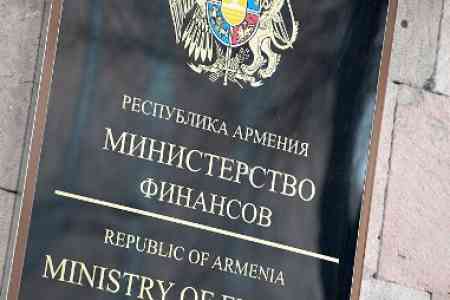 ArmInfo. By the end of 2020, the budget deficit of the Republic of Armenia will reach 459 billion drams, which is 7.4% of the RA GDP. A similar forecast was announced  on October 5 by the RA Minister of Finance Atom Janjukhazyan during  the sitting of the Standing Committee of the National Assembly of the  Republic of Armenia on Financial-Budgetary Issues.

Janjukhazyan called the obvious impact of martial law on the  country's economic development. In particular, the minister noted  that according to the revised forecasts, GDP by the end of 2020 will  decrease by 6.8%, amounting to 6.170 trillion. drams. Tax revenues  will also decrease by 35 billion drams to 1.320 trillion. drams. In  addition, as noted earlier, military spending will increase by 40  billion drams.  In turn, the Chairman of the RA State Revenue  Committee Eduard Hovhannisyan agreed with the announced forecasts  regarding tax revenues, informing that following the results of 9  months of this year.  already collected 1.016 trillion. drams.

Deputy Minister of Economy Avag Avanesyand added that there is no  cause for concern due to the increase in the ratio of public debt to  GDP, since in 2017 this indicator reached 69%. However, he explained  that thanks to the economic successes recorded in 2018 and 2019. the  debt to GDP ratio fell to 49%.  "I think that next year, due to the  growth of GDP and tax revenues, we will be able to approach the 2019  indicator. Therefore, I believe that from a macroeconomic point of  view, we are in a fairly good position.  Since we have reserves, due  to which we will be able to overcome the foreseen expenses>, - the  deputy minister explained.