Papikyan defies detractors-modernization of Metsamor NPP will be  continued 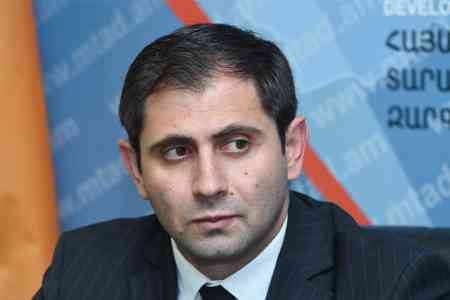 ArmInfo.Armenia intends to extend the life of the Metsamor nuclear power plant beyond 2026.

"This is for the information of all those compatriots who intensively  spread the idea that the program for extending the life of the  nuclear power plant has been suspended, modernization is not being  carried out, the operation of the nuclear power plant has been  stopped, the world has gone to waste," Suren Papikyan, Minister of  Territorial Administration and Infrastructure, said on April 15 from  the rostrum of the Parliament.

On the contrary, according to Papikyan, despite the detractors,  modernization will continue.  At the same time, as the Minister  noted, on January 14, 2021, the strategic program in the energy  sector until 2040 and the plan of relevant measures were approved.   The program, as Papikyan explained, plans to increase the share of  solar energy in the country's energy balance to at least 15% or 1.8  billion kWh by 2040. It is also planned to extend the life of the  Metsamor nuclear power plant beyond 2026 It should be noted that on  April 13, MP from the "Prosperous Armenia" faction Mikael Melkumyan  said from the rostrum of the parliament that the republic will soon  face very serious challenges in the field of energy security.   According to Melkumyan, the Armenian authorities, both in the past  and today, failed to conduct effective negotiations with the Russian  Federation to ensure the country's energy security. "The program of  restoring the existing resource of the NPP, in fact, was failed by  the current political power:It can be considered a great success if  we are allowed to operate nuclear power plants at least until 2031, "  he said. The MP from the PA faction recalled that this year a long  shutdown of the nuclear power plant is planned, lasting 141 days, and  we will not receive the planned 330 million kW from Artsakh.In  addition, Artsakh itself will not be able to provide the necessary  590 kW of electricity.However, "Of course, we expect serious problems  and risks of stable operation of the power system," the deputy said.   Based on this, the need to build a new nuclear power plant is  axiomatic for the parliamentarian, since the future fate of the  existing plant is in question, also in the context of agreements with  the EU within the framework of the Armenia - EU Agreement (CEPA).

As for solar energy, back in April 2018, the then Deputy Minister of  Energy Infrastructures and Natural Resources of Armenia, Hayk  Harutyunyan, said that until 2030, Armenia intends to have only  nuclear and renewable energy sources (RES) in the structure of  domestic consumption, and heat and gas stations will work for export.   So, according to him, by 2030 the share of RES (hydro and other  renewable energy sources) in the energy balance of the country should  be about 70%. According to the previously adopted "Concept for  ensuring the Energy Security of the Republic of Armenia", 20% of all  energy consumed in Armenia should have been covered by renewable  sources by 2020, and at least 50% by 2026. The government planned to  reduce energy consumption by 38% and, accordingly, energy costs by  2020.