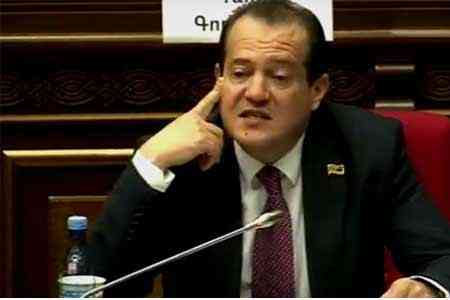 ArmInfo.By the end of 2021, the debt of the Armenian government will approach 70% of GDP. Meanwhile, the tax and budget rules established by the law "On the Budget System  of the Republic of Armenia" oblige the government to submit to the  parliament a project to return to the legal framework in case of  exceeding the 60% threshold for government debt.

This was stated on April 27 by the MP from the "Prosperous Armenia" faction, chairman of the Standing Committee on Financial, Credit and Budgetary Issues  Arkady Khachatryan during the discussion of the report on the  implementation of the state budget for 9 months of 2020.

As the Minister of Finance of Armenia Atom Jamjugazyan explained, the  financial authorities of the country are working on a corresponding  project, which involves the implementation of fiscal consolidation  until 2026, which will reduce the state debt from 70% to 60% of GDP.   These paths, according to Janjugazyan, are already predetermined by  law and do not require special "discoveries"from financiers.  In  particular, the proposed efforts relate to achieving a higher level  of manageability of current expenditures and increasing investment in  infrastructure projects, which will, in turn, increase the potential  for economic growth.