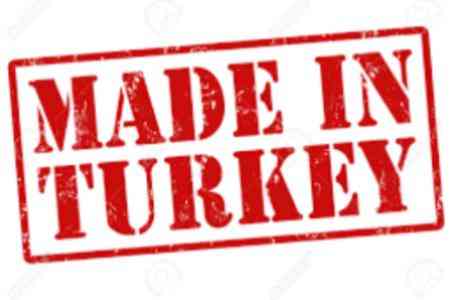 ArmInfo. Restrictions on the import of Turkish goods also apply to individuals, Chairman of the State Revenue Committee of Armenia Eduard Hovhannisyan told reporters in parliament on June 2.

The head of the SRC recalled that from January 1, 2021, by a  government decision, an embargo on the import of Turkish goods is in  effect for a period of 6 months. At the same time, the land border of  Georgia opens on June 1. "I urge citizens not to try to smuggle goods  across the border (of Turkish production, Ed.  note) into the  country, even in their personal luggage, since they will be  prohibited," he said.

To recall, the ban on the import of Turkish goods was imposed after  Turkey began to provide military support to Azerbaijan during the war  in Karabakh in the fall of 2020. In previous years, Armenia exported  goods from Turkey for $ 250-270 million per year. On May 6, during  the Facebook press conference of RFE/RL's Armenian Service, acting  Minister of Economy of the Republic of Armenia Vahan Kerobyan  informed that the government of Armenia is considering the  possibility of extending the ban on the import and sale of goods of  Turkish origin. So, according to Kerobyan, this is due to the fact  that, despite the restrictions on the import of Turkish goods into  the country, they are still sold in the local market, under the  pretext that stocks purchased earlier are being sold. Thus, as  pointed out by the Acting Head of the Ministry of Economy, unequal  competitive conditions are created for other importers.