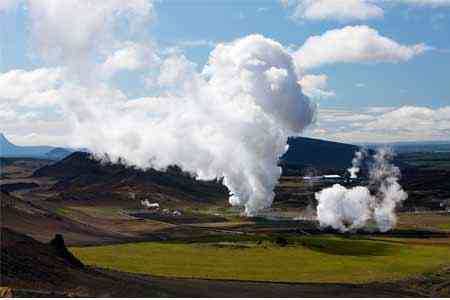 ArmInfo.Prospects for the development of geothermal energy in Armenia will be considered on June 3 at a conference dedicated to the results of the "Assessment of  geothermal energy resources and natural hazards in Armenia" research  project, prepared by a joint Armenian-American research group. The  project is funded by PEER Science of the US National Academy of  Sciences.

As the information center of the National Academy of Sciences (NAS)  of the Republic of Armenia reports, Armenia is known for its active  geological faults, potentially active volcanic systems. Active  volcanoes in Armenia not only represent a source of danger, but also  represent an active potential for the development of geothermal  energy. The use of the geothermal potential of the country is  becoming an increasingly important area due to the fact that most of  the country's energy production is currently generated from imported  fossil fuels. Scientists believe, this study of the sources of  geothermal energy in Armenia will significantly stimulate  interdisciplinary research in the field of geology - volcanology,  seismology, geophysics, geochemistry, and will facilitate the search  for geothermal sources.

Based on the results of the Armenian-American study, the project  group intends to submit to the Armenian government real proposals on  the use of geothermal energy resources.

To note, research on the development of alternative energy sources,  including geothermal energy, began in Armenia in the second half of  the 2000s. They were carried out by the Spanish "Arries" company and  based on the results of these works, it was decided to form "Karkar>  geothermal station with a capacity of up to 40 MW in the southeast of  the country. In April 2017, work began on the development of a  feasibility study (FS) for the plant construction project based on  the studies that have confirmed the resources of this source.  Two  wells were drilled to a depth of 1,500 meters each, which confirmed  the availability of the necessary volumes of hot water with a  temperature of 122.5 degrees above zero for the construction of the  station.  Testing was carried out in the best laboratories in the  world. It was originally planned that the program will be put up for  an international tender by the end of 2018. However, no investors  were found, although some interest was shown by the Czech SUMEG  GEOPOWER AG company. According to the program, the construction of  this power facility will allow Armenia to receive an additional  200-250 million kWh of electricity. Moreover, the station will become  the base, that is, it will generate electricity around the clock.   Preliminarily, the volume of investments in the project is about $ 50  million. A road was laid to the Karkar area, which was supposed to  serve the construction and operation of a geothermal power plant.   Besides "Karkar", there are other promising sources in Armenia, for  example, "Jermaghbyur", "Lidzor", sources on the border with Georgia  and in Sisian.

To note, the previous renewable energy research program was  implemented with the financial assistance of the Climate Investment  Fund. Its total cost was $ 40 million, of which $ 28 million was  spent on exploring opportunities in the field of solar energy, $ 9  million was a component of geothermal energy and $ 3 million was a  component of the development of small hydropower.