Ardshinbank invited children to the cinema on International Children’s Day 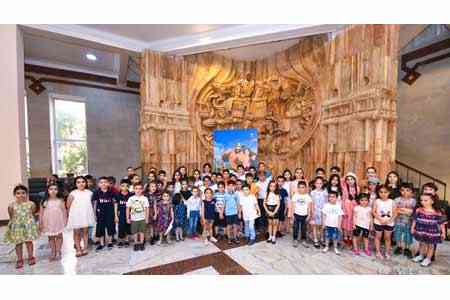 ArmInfo.On June 1 - International Children’s Day - Ardshinbank made a gift to the children of its employees by inviting them to watch “Olimpicos” the new animated movie at the Moscow cinema.

The release of the movie is timed to coincide with the opening of the Summer Olympic Games in Tokyo. Before the show had started, the children were told about the cartoon’s background story, the protagonist - a true character in the history of ancient Armenia - the Armenian King Vagharshak, who won the title of Olympic champion.

On behalf of Ardshinbank, Head of the Marketing Communications Department Naira Arakelyan congratulated the children and their parents and encouraged them to follow the upcoming Olympic Games in Tokyo, which are also attended by Armenian athletes: “On this festive day, we wish all the children of our country a peaceful, cloudless sky and many joyful meetings, such as today. Let our children grow up healthy and happy!”

To remind, the full-length movie “Olympicos” was created by the Sahakyants animation studio in cooperation with Sharm Holding company.

Ardshinbank is the partner bank of the movie, as well as the sole sponsor of all broadcasts of the Olympic Games on Channel One, which will be held this summer in Tokyo, the capital of Japan.