Deputy Minister: Discussions are underway with Iran on the launch of  the Meghri FEZ, the issue became especially relevant after the war in  Artsakh 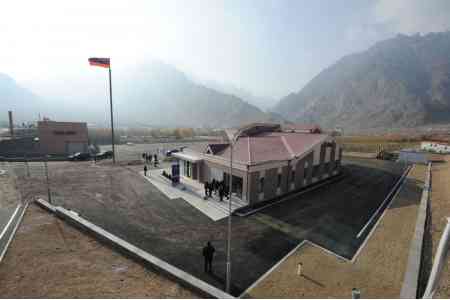 ArmInfo. The Iranian side is very interested in launching a free economic zone in Meghri. The issue has become especially urgent after the war in Artsakh, said Deputy  Minister of Economy of Armenia Varos Simonyan on June 3 in  parliament, responding to the question of MP from the Prosperous  Armenia faction Mikayel Melkumyan, how justified it is at present to  hold discussions with the Iranian side regarding the use of the  Meghri FEZ.

According to Melkumyan, two years ago the parliamentary commission  conducted research and clarified a number of obstacles to the launch  of the FEZ. So, according to him, we are talking, first of all, about  the problems with the alienation of lands. Currently, the FEZ is  located on a small area of 1.7 hectares, and talks about the  possibility of deploying the zone's activities on such small areas  are simply frivolous. The MP noted that the FEZ is officially  registered within the framework of the Eurasian Economic Union,  within the framework of which Belarus received 6 access zones,  Kazakhstan - 8 zones, Kyrgyzstan - 1. "It is surprising that quotas  and zones have been allocated, and the zone is inactive," Melkumyan  said.

In addition, Melkumyan recalled the trial, within the framework of  which the illegally alienated land plots are returned to the state.   The MP urged to listen to the proposal of the Mayor of Meghri, who  offered 50 hectares of land located adjacent to the border in  exchange for border areas. "Nevertheless, nothing has been done so  far," the MP stated.

As Melkumyan stated, over the past three years, the country's  authorities have not done anything to resolve the issue. However, the  acting Prime Minister of Armenia Nikol Pashinyan, at a meeting with  the Minister of Foreign Affairs of the Islamic Republic of Iran,  Mohammad Javad Zarif, who arrived in Armenia on a working visit,  declares that the FEZ can become a very strong fulcrum for the  further development of the economic sector. "So what motivates our  activity," he asked.  In response, Deputy Minister of Economy stated  that Yerevan does not intend to wait for the completion of the trial  and the purchase and return of land plots.

To restart the Meghri FEZ, Armenia is negotiating with partners, in  particular, from Iran. Three groups from Iran visited Armenia, who  have already made a corresponding proposal.  In the near future,  Armenia plans to select the operator of the Meghri FEZ on a  competitive basis and launch the FEZ activities on an area of 1.7  hectares, on which the administrative building is located. Then they  will use the nearby territory of 5 thousand, and at the next stage,  it is planned to acquire nearby territories, and then, at the third  stage, they will take advantage of the proposal of the head of the  Meghri community.