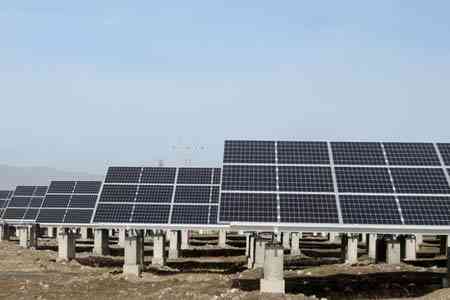 ArmInfo. On June 24, at a Cabinet meeting, the Armenian government approved the results of the pre-qualification competition dated December 3, 2020 within the  framework of the project for the construction of the  "Ayg-1"  photovoltaic industrial station and made changes to the terms of  financing the project.

Acting Deputy Prime Minister Tigran Avinyan reminded that within the  framework of the project it is planned to build a "Ayg -1" solar  station with an installed capacity of 200 MW. The station will be  located on the territory of the Talin and Dashtadem communities of  the Aragatsotn region of Armenia. The winner of the competition - Abu  Dhabi Future Energy Company PJSC - Masdar, according to him, offered  a fairly low tariff for the future solar generation facility - $  0.0290 of electricity excluding VAT per 1 kWh of electricity. The  beneficiary of 85% of the program's shares will be "Masdar" company,  and 15% of the shares will belong to the Armenian National Interests  Fund (ANIF) . The cost of the project will be approximately $ 174  million, the station will be commissioned in 2025.

According to acting Minister of Territorial Administration and  Infrastructures Suren Papikyan, the government meets the wishes of  the winner of the competition and changes the terms of full financing  of the project: instead of "180 days from the date of signing",  setting "545 days".

To recall, on May 21, 2020, the Armenian government launched a  pre-qualification competition, the results of which were to be summed  up by October 27 of this year. However, due to the coronavirus  pandemic and the Karabakh war, the deadlines have been extended. On  July 12 last year, an agreement was signed in Yerevan on cooperation  in the construction of solar photovoltaic station (200 MW), wind power plant (200 MW) and "floating" solar installation (100 MW). As noted  then, more than 200 rivers and lakes could be used for floating solar  programs.  Masdar is a subsidiary of Mubadala Investment Company,  UAE, with total assets of $ 220 billion and one of the world's  leading renewable energy companies.